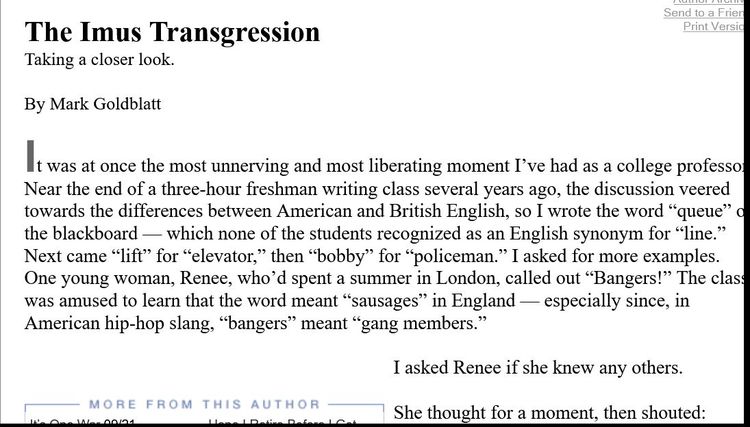 National Review: Race Is "A Perceptual Category, Not A Biological One"

Mark Goldblatt is a college professor at Fashion Institute of Technology of the State University of New York, the author of a book called Africa Speaks, which is "controversial" because he's a white man writing a first-person narrative in the character of a black man. He's also a regular writer for National Review Online.
He has what I have to say is a very funny story, which has a happy ending, although of course it could have ruined his academic career and the career of one of his students:

It was at once the most unnerving and most liberating moment I’ve had as a college professor. Near the end of a three-hour freshman writing class several years ago, the discussion veered towards the differences between American and British English, so I wrote the word “queue” on the blackboard — which none of the students recognized as an English synonym for “line.” Next came “lift” for “elevator,” then “bobby” for “policeman.” I asked for more examples. One young woman, Renee, who’d spent a summer in London, called out “Bangers!” The class was amused to learn that the word meant “sausages” in England — especially since, in American hip-hop slang, “bangers” meant “gang members.”

I asked Renee if she knew any others.

She thought for a moment, then shouted: “N*gg*rs!”

There was an audible gasp from the class — a racially mixed group of 18 students. My heart raced. Renee, meanwhile, was glancing back and forth, still smiling, trying to figure out why a sudden hush had followed her remark.

Finally, she turned to me and asked, “What?”

I managed, “Renee, we don’t use that word here.”

Several seconds passed before I got it. “Oh, you mean knickers.”

By the time I’d written the k-n-i-c-k on the blackboard, the students were roaring with laughter. As the black girl sitting beside Renee clued her in, Renee blushed beet red. “I’d never . . . I mean, I’d never . . . “ That elicited even more laughter. I wound up ending the class ten minutes early because every time I tried to talk, the students began to crack up again.[ The Imus Transgression Taking a closer look. Mark Goldblatt on National Review Online, August 20, 2007]

This is in the course of a discussion of Don Imus, and what can and can't be said. In the middle of it, Goldblatt throws in this aside:

Of course, every discussion about “race” should begin with the observation that it’s fundamentally a perceptual category, not a biological one. There’s more genetic variation within the most common racial groupings than between them. Even the narrower term “ethnicity” is ill-defined, based on long-forgotten tribal relations; sorting hundreds of ethnicities into arbitrarily drawn color-coded umbrella groups like “white” or “black” or “brown” or “yellow” is, to say the least, anthropologically dubious.

That brings to mind this quote, from the old Sixteen Volts blog:

This is why it is so very strange that I have noticed, based on my observational experience, that whenever somebody says that races don't really exist, the person making this claim always seems to turn out to be white.

The claim Mark Goldblatt is making was popular with the late Stephen Jay Gould, and RIchard Lewontin. It's called Lewontin's Fallacy by those who are experts in such things. See here for the scientific details

Someone at the GNXP site asked if that logic could apply to income distribution, quoting an Urban Institute Study [PDF]that pointed out

It is important to recognize that most wage inequality occurs within and not between groups. The unweighted average Gini coefficient across all race, gender, and education groups was 0.256 in 1995, over 80 percent of the total Gini. Put another way, if all groups had identical mean wage rates (for example, black male dropouts had the same average wages as white male college graduates) but wages differed within groups as they do today, nearly all the inequality in wage rates would remain.

What this implies is that if you tell me that race doesn't matter, because differences within groups are so much bigger than differences between groups, then please don't complain about average incomes being lower, (because of presumed discrimination) since the same thing applies.

And what Mark Goldblatt is writing about race and biology is not a real scientific statement, it's the equivalent of phrenology or a belief in astrology. It's a pious liberal and neo-conservative belief intended to deal with human biodiversity by ignoring it.

If you want the detailed rebuttal, you can read Fads and Fallacies In The Name Of Race Does Not Exist, by Steven Goldberg on VDARE.com. You sure aren't going to read it on NRO.