The Tennessean reports, via Refugee Resettlement Watch,  that six Nashville schools will be teaching Arabic classes in the fall semester. Is it good or bad to teach Arabic in an American high school? It depends on why it's being taught and how it's being taught.

As for Arabic, it would be good for more Americans to learn it. When I was in Iraq ten years ago, I found it useful. A little Arabic goes a long way.

However, in today's PC environment, the teaching of Arabic in public schools would likely be accompanied with pro-Islamic propaganda, and we don't need any more of that.

Here's what The Tennessean reports:

Starting this fall, Metro Nashville Public Schools will begin offering Arabic language classes. The creation of the classes expands on the district’s foreign language offerings of Spanish, Mandarin Chinese, French, Latin and German, according to a press release from the district.

All of the Arabic classes will be offered in grades 7-12 and are being installed in six South Nashville schools. The area is one of the most diverse in the district and includes a high number of English Language Learners.

Metro Schools to offer Arabic classes in fall Jason Gonzales, The Tennessean, May 26, 2015

Hold it right there. The fact that an area is "diverse" and "includes a high number of English Language Learners" is a warning flag that foreign languages are not being taught for the right reason. 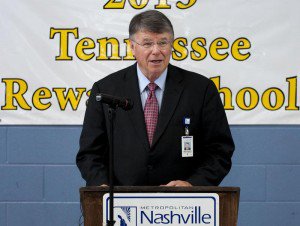 “This latest expansion strengthens our district’s dedication to foreign language instruction and diverse course offerings outside of the core academics,” said Director of Schools Jesse Register   in the release.

“We are very excited about starting this program. It gives our schools yet another unique and attractive feature for families, and helps meet the demands of our increasingly diverse city.”

Nowadays that sort of talk, coming from an educrat, is a definite warning flag.

The six schools were chosen based on an audit of students’ home languages. Each of the schools has students that speak Arabic as their primary language, and beginning Arabic and heritage Arabic classes will be taught for the varying abilities of students.

Schools shouldn't be pressured to teach a language because a lot of people in that area are speaking that language. Immigrants need to learn English.

And, "Heritage Arabic classes" are Arabic classes for students who are already from Arabic-speaking backgrounds. Why do they need the classes? To reinforce their otherness? Will these classes encourage assimilation?

Heritage Arabic classes are meant to build off the skills students in the districts already have, said Chief Academic Officer Jay Steele in the release. “We believe it will help them be more engaged in school as a whole and also help them stay connected to their native culture,” he said.

It's not the job of our public schools to "help them stay connected to their native culture." In some cases, such "connections" are going to cause more problems.

But it also will be a boon for beginners to learn a second language, Steele said. “In today’s environment, it’s often a necessity for students to speak two languages,” he said. “We need to give our students a solid background in foreign language so they can take it even further in college, potentially to the point of full fluency. That opens up a world of possibilities after graduation.”

Once again, I support foreign language teaching in the U.S., as long as it's done for the right reasons and in the right manner.

The district is recruiting and working to hire certified teachers to teach the classes. Once hired, those teachers will then design the curriculum.

So who are they going to get to teach these Arabic classes? What sorts of ideas will they include when they "design the curriculum"?

These are all legitimate questions.