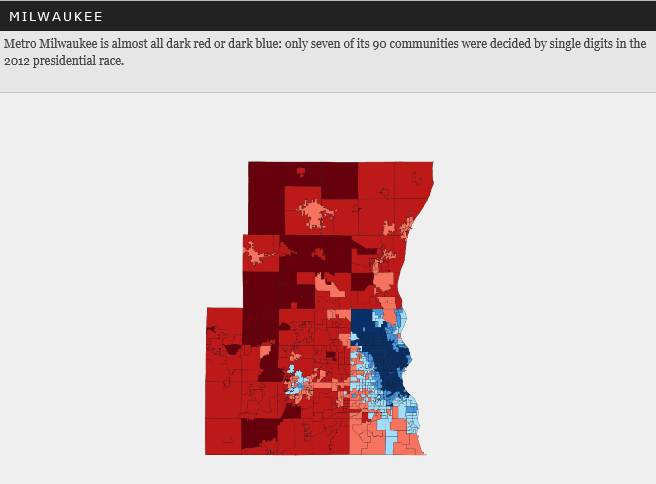 The NYT is puzzled:

The Upshot ON WISCONSIN The Curious Case of Milwaukee’s Suburban Voters MAY 6, 2014

“The most polarized part of a polarized state in a polarized nation” — that’s how Craig Gilbert of The Milwaukee Journal Sentinel describes the Milwaukee metropolitan area in the masterful first article of a four-part series on the region’s politics. The region is just as polarized as Mr. Gilbert suggests.

Milwaukee is not the only metropolitan area divided between a heavily Democratic, nonwhite urban core and overwhelmingly white suburbs. But the Milwaukee suburbs are still unusual. They haven’t moved at all toward the left, unlike other Republican-leaning Northern suburbs.

Wisconsin, which was traditionally a left-of-center, reformist state with a history of German social democrat politics (as Alice Cooper points out in Wayne's World above, Milwaukee elected three Socialist Party mayors) has tried many reforms over the years to improve the lives and behavior of its black residents.

Unfortunately, among African-Americans, Wisconsin's blacks continue to rank very near the bottom of all 50 states on most metrics. For example, the biggest white-black gaps in any county in America are found in Wisconsin's Dane County, whose county seat is Madison.

The problem seems to be that Wisconsin's generous welfare benefits of the 1960s and 1970s attracted the laziest Southern blacks, and white Wisconsinites haven't figured out much to do about it since, other than to listen a little more to Republicans.