"Myth Of The Racist Cabbie" Gone From NRO—Website Glitch Or PC Censorship? 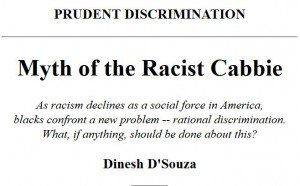 The interesting times we've been having with the latest upgrade to VDARE.com reminds me to point out that strange things happen to other websites.

Dinesh D'Souza's article The Myth Of The Racist Cabbie, from October 9, 1995, was online at National Review from at least 1999 to as late as 2013 at http://nationalreview.com/09oct95/feature.html, according to Archive.org. It stayed up in the background through many reboots of the NRO, site, but now it's gone, existing only on Archive.org .

I quoted it during the 2008 campaign in a post titled "Obama's Taxicab", about a claim by the Reverend Wright that  "Hillary never had a cab whiz past her and not pick her up because her skin is the wrong color."

a taxicab would probably consider it safe to pick up Hillary Clinton, since middle-aged white women commit very few crimes of violence, whereas black criminals have killed more cab drivers than left turns.

I like that phrase about "more cab drivers than left turns", but it's the kind of thing that we at VDARE.com can say, and NRO can't, or doesn't want to. But apparently not in 1995, when D'Souza was writing this, and Peter Brimelow was still employed there.

Here's something that D'Souza wrote and NRO printed:

"This racism stuff is all bull —- ," one African student who was driving to put himself through school, told me. "I'm not going to pass up a fare, which is money in my pocket. But I don't want to get robbed. You know what the black crime rate is in New York? Do you want me to risk a gun to my head, man? What's wrong with you?"

"Hey, that's c—- . I pick up older blacks all the time. I have no problem with giving black women a ride. My black buddies won't pick up no n*****rs. I ain't no more racist than they are."

The four-letter words were redacted by NRO, in the interests of decency, D'Souza's book has them in full.("c—-" is crap.) The six-letter word that we have now been trained to call the "N-word" was spelled out in full in both.