Free speech is increasingly under attack in the West, due to Muslim immigration, but there has been little media attention given to alarms like the attempted assassination of Danish journalist Lars Hedegaard (pictured) in Copenhagen earlier this month.

A Muslim came to his front door pretending to deliver a package, but instead drew a gun and fired at Hedegaard for his outspoken views in warning against hostile Islam. In January, he began publishing Dispatch International to report the unpleasant news about Muslims in Europe which made him a bigger target for jihadists.

One might think the press would be concerned about censorship, but in general it has been paralyzed in fear, for safety concerns and dread of racism accusations, even though Islam is clearly not a race. During the Danish cartoon controversy of 2006, only a couple American publications actually printed the drawings of Mohammed. 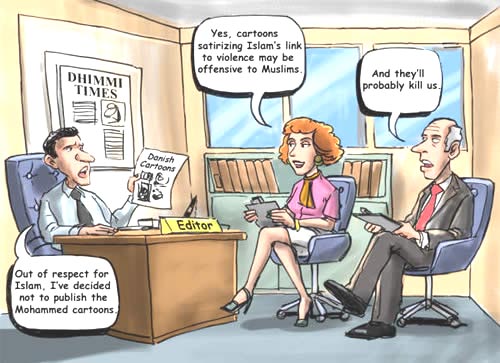 Regarding the Hedegaard assassination attempt, only Canada’s SunTV has paid attention on this side of the Atlantic. You don’t see this sort of coverage on Fox News.

Hedegaard was lucky to escape with his life. But the assault shows what critics of Islam now face. The violence was not an anomaly: artist Kurt Westergaard was also attacked in his home by an axe-wielding Somali for upsetting sensitive Muslims. Lars Vilks has received numerous death threats for his drawings showing Mohammed as a dog.

In Paris, the humor magazine Charlie Hebdo was firebombed in 2011 for a slightly rude issue about Mohammed, yet the publication continues to produce edgy material, notably a cartoon biography of Islam’s prophet.

Here in the United States, cartoonist Mollie Norris of the Seattle Weekly was forced to go into hiding after suggesting the Everybody Draw Mohammed Day in support of free speech.

Another Cassandra is Dutch politician Geert Wilders, who is currently doing a speaking tour through Australia. The speech scheduled for Perth was canceled because the venue pulled out at the last minute: such is the effectiveness of intimidation and threats of violence.

Below is an Aussie press interview in which Wilders expressed his objections to Islam despite rather belligerent questioning. He warned Australians to learn from Europe’s mistake of allowing Muslim immigration.

One bit of good news: Wilders’ speech in Melbourne went ahead on February 19, despite scuffles outside from unfriendlies. Read the text here.