Muslim Immigration: Despite the Obvious Threat, They Keep Coming Because They Can

Here is a clear picture of how America’s immigration system has lost its Off switch for even the most dangerous foreigners. The Conservative Review has produced a fine graphic showing the dangerous places that send thousands of new residents to our cities and Daniel Horowitz provides a well documented explanation of bad policies on steroids that put the nation at risk.

How many people in this country are aware of the fact that immigration from Islamic countries has doubled since 9/11? According to data Conservative Review collated from the DHS Yearbook of Immigration Statistics, the U.S. has issued 1,628,854 green cards to immigrants from predominantly Muslim countries from 2001-2013. Here is the breakdown by country: 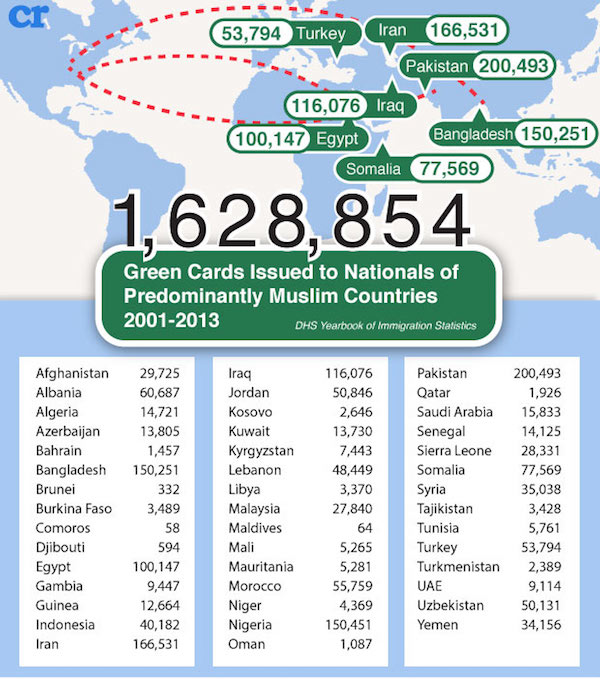 According to the data, a large portion of this new wave of immigration comes from volatile countries such as Iraq, Iran, Bangladesh, and Pakistan. And don’t forget about Somalia, the source of much of our recent troubles with homegrown terror, particularly in the Minneapolis area.

However, on the other hand, it is quite likely that Muslims have emigrated from non-predominantly Muslim countries in Europe and Canada or other countries not listed in our data table. Muslims from other countries have most certainly been issued green cards, such as those who come from Chechnya in Russia (Boston bombers) and India. Over 866,000 green cards have been issued to Indian nationals over the same period of time. This is obviously conjecture, but if it’s assumed that 13.4% of immigrants from India are Muslim – commensurate to their share of India’s native population – that would add another 116,000 Muslim immigrants to the overall tally.

The overall numbers track closely with Pew’s estimates of 100,000 new Muslim immigrants per year, almost twice the level of the previous decade. It is also 10% of our annual immigrant population. At that rate, the Muslim population in the U.S. is expected to double by 2030 and triple by 2050.

A Growing Threat
There’s no doubt that some Muslims come here to seek better economic opportunity, just like any other group that has immigrated in recent years. But, if even 10% of these immigrants have radical Jihadist tendencies, that is 160,000 new ticking time bombs – all brought here after 9/11. And, as I’ve noted before, while there will always be only a small percentage of even the most radical community actually engaging in terror activity, there are likely hundreds of thousands more who share the ideals of Sharia law and share the very sympathies that help cultivate a climate of homegrown terror. A 2007 Pew survey found that 26% of young Muslims in America support suicide bombing in pursuit of Jihad (see p. 60). This is a very ominous statistic given the increased share of young Muslims and the growth of cyber-jihad since 2007.

This explosion of Muslim immigration has also led to the rapid growth of extremist mosques in this country, many of which are funded by terror-supporting countries or organizations. The latest painful example was the discovery of the Phoenix mosque where the two Garland terrorists prayed. This mosque, which is led by an ethnic Palestinian and tied to the Muslim Brotherhood, seems to have engaged in many activities that would terrify ordinary Americans.

This explains why our nation is witnessing the radicalization of so many new Muslim converts, such as Elton Simpson, the first Garland shooter. Simpson was also allegedly in touch with a Jihadist American-Somali immigrant from…you guessed it…Minneapolis.

Moreover, the 1.62 million number doesn’t even include non-immigrant visas. CR pointed out a couple of months ago that student visas from some of these same countries have increased astronomically, with those from Saudi Arabia increasing ten-fold over the past decade. Arabic is the fastest growing language on U.S. college campuses and among the immigrant population in general. It’s no wonder FBI Director James Comey told reporters last week that the terror threats have become needles in haystacks spread throughout every corner of the country. With an endless stream of immigrants from Jihadi parts of the globe, in conjunction with the devastatingly effective and ubiquitous cyber Jihad, our government officials have lost control over our security – their one core mission.

Yet, instead of being more careful with immigration and guarding our front door, Obamas policy has been to increase refugees from volatile parts of the world that are embroiled in Islamic civil wars. The Magic Valley of Idaho is one of the newest locations chosen for an influx of Syrian refugees. This raises concerns if the State Department and DHS can accurately identify instances of potential jihad. Are the residents of the Magic Valley to believe they were all properly vetted, given the federal government’s shoddy track record in recent years?

With over 150 known American Muslims caught attempting to join ISIS, and especially following the thwarted terror attack in Garland, Texas, the threat of domestic terrorism is rapidly spreading. Jeh Johnson, Secretary of Homeland Security, said on Sunday that he fears a terrorist can “strike at any moment” and that we should expect to see more “lone wolf” scenarios play out. House Homeland Security Chairman Michael McCaul (R-TX) told Fox News that the “threat environment” is one of the highest he’s ever seen. Military bases in the U.S are now operating on an elevated terror threat level.

The Distraction
While top government officials are finally recognizing the existential threat posed by homegrown terror, most of them fail to identify the core problem. The discussion inevitably leads to a debate over boots on the ground in Syria and Iraq to engage the U.S. military in yet another Sunni-Shiite Islamic civil war, instead of confronting the true problem – open-ended and growing immigration from the Middle East and other areas where Jihad and Sharia law are the guiding influences.

Senator Lindsey Graham (R-SC), an ardent proponent of loose borders, is trying to parlay the concern over homegrown terror into further involvement in endless Islamic civil wars. Ironically, it’s these involvements that have prompted the State Department to take in both Sunni and Shiite refugees who have created the very sort of terror concerns we are now trying to avoid.

Who voted for these policies? When did the American people ever have the opportunity to give input through a transparent process to the radical transformation of America? How many Americans would have supported a decision post-9/11 to roughly double the rate of Islamic immigration?

During any other era, these questions would be eagerly proposed by members of Congress across the political spectrum. These would not be partisan or controversial questions. They would represent common sense concerns about the very survival of our nation both from a security standpoint and from the perspective of a liberal democracy. Sadly, in this era of political correctness that knows no bounds, none of the politicians seem to care. Hopefully, they won’t be made to care through another avoidable terror attack.