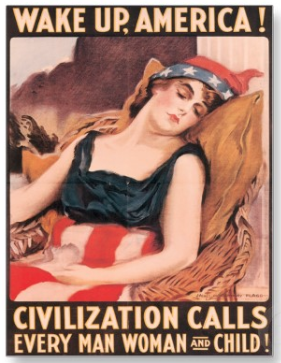 It’s pretty amazing that with all the news about the threat of hostile Islam to our freedom, very few people mention that it got here through immigration.

Is it too rude to suggest that the historical enemies of the West not be welcomed inside the gates by the hundreds of thousands? We know that Muslims complain constantly about their tender feelings being hurt by cartoons and such, but they have plenty of acreage in dar al-Islam, with at least 49 Muslim-majority countries as counted by Pew. They can sharia to their heart’s content. Geography is wonderful that way.

How hard is it to see that Muslim social norms of polygamy, child marriage, misogyny and religious supremacism are not a good fit with western freedom? And thats even without the mass-murdering genocide stuff we now see in the Middle East.

Fox TV host Tucker Carlson has not been shy about observing the serious problems that unwise immigration policy causes to America’s safety and economic well being.

On Tuesday, he appeared on Fox News to discuss the worsening threat to America from jihad groups.

CARLSON: One of the real threats from ISIS we face domestically is immigrants to this country going back over to the Middle East to join ISIS and posing a real threat to us. Why is the United States government importing hundreds of thousands of potentially dangerous folks from that region, from Iraq, from Syria, from Somalia? Why are we doing that?. . .

How do you deal with them here? It’s kind of a consensus in the foreign policy world, you deal with groups like ISIS by killing them or arming this or that group. But domestically, we all recognize there’s a threat here: there are people in America who are sympathetic to ISIS. Why again — this is a question to ask US members of Congress —why are you allowing the US government to resettle people who are sympathetic to ISIS in the United States? What do we get out of that?

Anyone who would do that is a reckless person who does not have America’s best interests at heart. And that includes many members of Congress who ought to be called out on this. The administration too. What do we get out of that? Nothing.

BILL HEMMER: So what are you saying — prevent them from coming here?

CARLSON: I’m saying that exact thing. Why would you do that? The United States has the pick of the world; people want to move here. Tens of millions of people want to move here. Yet we are almost perversely intentionally selecting people to move here who potentially pose a threat to us from countries where the ideology behind ISIS is common, is supported by a lot of the population, and we’re moving them to this country.

And you’re not allowed to say anything about it. You’re somehow a bigot if you note that. Look at Europe. Europe’s terrorism problems are the result of its immigration policies. That’s a really obvious lesson. It’s been going on for 50 years. We haven’t learned it. Why?