Murdering Sudanese Teen Refugee Wants a Do-over in the Courts 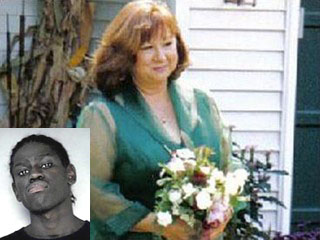 A bad refugee kid gone wrong has reappeared, after pleading guilty as a 17-year-old to the murder of Mary Bethell (pictured), 47, a substance-abuse counselor in Aurora, Illinois, three years earlier. Now Garang Deng, formerly of Sudan, regrets confessing to the murder and wants a new trial. It was a long strange trip getting to this point, and the story is again being thrust upon the public, unfortunately.

Do-gooders love to rescue diverse children from troubled areas of the world, even youngsters deeply damaged by exposure to terrible violence. By the time the little kiddies grow up imitating the sort of behavior they experienced, the noble rescuers have gone on to other projects, and local law enforcement has to pick up the pieces.

When three young African refugees were being sentenced in 2009 for the attempted kidnapping of a Virginia woman for ransom, a retired resettlement professional testified, “They went through terror themselves, so I couldn’t imagine them inflicting that on anyone else.”

That’s the naive attitude of elite do-gooders. They don’t understand how the imprinting of violence on young minds often overwhelms any revulsion to it, just as an abused child of an alcoholic hates the condition but may succumb to it.

However Deng’s legal situation plays out, he was a human time bomb of the sort unwise to import to this country as a refugee. As a boy in Sudan, he experienced terrible brutality and when he was relocated to America he began committing increasingly violent crimes as a young teenager, culminating in murder. It shouldn’t be a surprise.

Refugee Resettlement Watch reminds readers that any additional court costs will be the responsibility of local residents as a result of Washington’s meddling.

When Garang Deng pleaded guilty to murder more than four years ago, it seemed like the final act of a tale that stretched from war-torn Sudan to a peaceful Kane County bike path.

After breaking into the home of Marilyn Bethell of Aurora in October 2005, Deng took her to the Illinois Prairie Path and shot her once in the head, Kane County prosecutors said.

Almost immediately after his guilty plea in 2009, Deng regretted it and began the legal process to withdraw the plea. An appeals court ruled in his favor in June.

Deng is scheduled to return to Kane County on Tuesday in his first court appearance in legal proceedings that eventually could lead to a new trial.

Deng, who was 14 at the time of the slaying, was a Sudanese refugee whose family had left the African nation when he was a young boy to seek a more peaceful life. But Deng accumulated a history of juvenile offenses in DuPage County beginning at age 11, authorities said.

Deng allegedly broke into Bethell’s house sometime around Oct. 31, 2005. Her car was involved in a crash that day, and someone matching Deng’s description was seen running from the vehicle, police said. Bethell’s body wasn’t found until Dec. 26 near Kirk and Butterfield roads.

Police arrested Deng in the slaying in 2007. Authorities said they gathered DNA evidence linking him to the home of Bethell, 47, a substance abuse counseling assistant. Police later recovered a Russian-made pistol they think was used in the slaying, though they were unable to provide a definitive match.

A judge ruled that Deng could be tried as an adult. He eventually pleaded guilty in May 2009 to first-degree murder but sought to withdraw his plea after less than a month.

In a court motion, Deng said he wasn’t fully aware of the terms of the plea deal and his mother hadn’t been informed. He also argued that his 35-year sentence was too long and that a 20-year term would allow him to learn a trade so he could become a productive member of society and not be a “parasite” when he left prison.

In another court motion, Deng admitted he was in Bethell’s house but said that someone named Robert killed her.

In June, the Illinois 2nd District Appellate Court tossed out his plea deal. The appellate court said the manner in which prosecutors pleaded out the case would have required a 45-year minimum sentence — 10 years more than Deng received.

Because Deng, 22, was not properly advised of that minimum term, he could withdraw his plea and have his case retried, the appeals court ruled. Kane County prosecutors appealed, but the Illinois Supreme Court declined to hear it.

McMahon said his office has not been contacted by legal counsel representing Deng, who is serving his sentence at the Menard state prison downstate.

Because the Bethell slaying investigation straddled two counties — Bethell lived in DuPage on the far north side of Aurora and her body was found in Kane — prosecutors from both counties are involved.