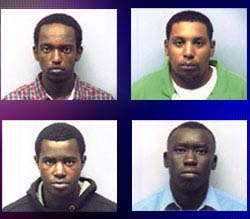 I wrote about this case of crime diversity in May: Diversity Is Strength! It's Also... African "Refugee" Kidnappers In Virginia. The trial is finished and the sentences are in — 5 1/2 years for the Africans and 4 1/2 years for the American.

The plot was bizarre, carefully planned and amateurishly executed: To make money in America, three young men from refugee families set out to find a wealthy woman, abduct her from her home and hold her for ransom.

It all unraveled as soon as Audrey Levicki answered the door to her Southwest Roanoke County home.

Suspicious that the two men were not the Red Cross volunteers they claimed to be, Levicki braced the door with her foot and then slammed it shut on the arm of the one who tried to reach inside.

The two men ran off, despite months of planning and a getaway car waiting at the end of the driveway with rope, handcuffs and other tools of a kidnapping. The duo was quickly arrested along with two accomplices, setting in motion a series of unintended consequences that culminated Monday at a sentencing hearing in U.S. District Court in Roanoke.

Levicki, whose intended fate was to be held in a rundown camper until her captors could collect up to $1 million from her corporate executive husband, said that she is now a prisoner in her own home.

"My life went to hell on April 6," Levicki said in a statement to Judge James Turk, recounting how the incident led to fearful days, sleepless nights and a loss of security so profound that she no longer ventures outside to feed the dog unless armed with a baseball bat.

For the three African natives who tried to kidnap Levicki — Luke Musa Elbino, 20; Mohammed Hussein Guhad, 20; and Joshua Kasongo, 19 — the consequences went beyond the five-and-a-half-year prison terms they received at the end of a daylong hearing.

Once they are released from prison, the three face almost certain deportation back to Somalia, Sudan and Rwanda — countries their families fled when they were boys to escape civil war and genocide.

And how diverse was the sentencing hearing? Very.

At times, the hearing bordered on surreal. On one side of the jam-packed courtroom, residents of an affluent suburban neighborhood sat in support of Levicki. Across the aisle — and from halfway across the world — sat the friends and families of the defendants. Many of them refugees, some were dressed in colorful native robes and headscarves.

Emotions ran high all day; court was recessed after Elbino's sister fainted and fell from her seat in the gallery. At another point, a spectator pointed his finger skyward and chanted an African song.
[Bizarre case of abduction comes to end, Roanoke Times, November 3, 2009]

Theoretically, the wanna-be kidnappers could have gotten life in prison, but that wasn't going to happen, given they were all young and had no priors. Five years in prison would be considered a tough sentence in some quarters, and it's likely the strong victim statement was important in putting these dangerous characters in the slammer at all.

The do-gooders were shocked that such a crime could happen. "They went through terror themselves, so I couldn't imagine them inflicting that on anyone else," testified Barbara Smith, a retired refugee resettlement professional.

But experience has shown that war-traumatized children may grow into troubled, violently criminal adults. The Refugee Industrial Complex has no business dumping these human time bombs into American communities without proper oversight at the least.

One revealing statistic: An estimated 80 to 90 percent of Lost Boys suffer from post-traumatic stress disorder, or PTSD, which can lead to substance abuse, depression and domestic violence. The thousands of Lost Boys, who were orphaned by war in Sudan, have been beloved among the professional do-gooders for their uplifting tale of success against long odds. However, the psychological disorders and crimes that erupt years later don't get the headlines. Nobody wants to hear the criminal downside of cultural diversity, which is the real story.

See also the remarks on this case in Refugee Resettlement Watch.