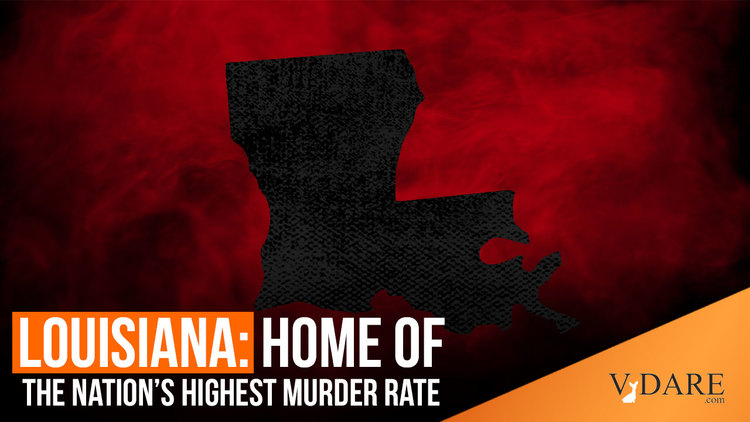 Back in 2005, I was much denounced for pointing out the high murder rate in New Orleans and saying that the local culture of “Let the Good Times Roll” might not provide the optimal moral guidance for blacks.

Why Does Louisiana Consistently Lead the Nation in Murders?

It has problems common to several Southern states, like a high rate of poverty, but also an inheritance of violence.

To solve that puzzle, first consider a wider pattern in the South: a history of violence that stretches back further still.

A New York Times article in 1998 pointed to “a divergence that has persisted for as long as records have been kept” in which “the former slaveholding states of the old Confederacy all rank in the top 20 states for murder, led by Louisiana, with a rate of 17.5 murders per 100,000 people in 1996.”

And that’s why the old North Central frontier states like Minnesota, the Dakotas, Iowa, and Kansas have such high murder rates today. Who can forget “Bleeding Kansas” of the 1850s? As Faulkner said, “The past is never dead. It’s not even past.” Similarly, Chinese in San Francisco are always shooting each other in 2021 due to emanations from the Tong Wars of the 19th Century.

… Many factors could help explain Louisiana’s unwelcome ranking, including disproportionate racial segregation, job discrimination and poverty. But nearby states have a lot of these problems, too. So what might make Louisiana distinct?

New Orleans has had the nation’s highest murder rate for any big city a dozen times since 1993, with 424 murders in 1994 at the height of the city’s bloodletting. The city’s murder rate that year stood at 86 murders per 100,000 residents, the single worst ever reported by a big American city.

But even if New Orleans were removed from Louisiana’s count, the state would have recorded the nation’s highest or second-highest murder rate in 12 of the last 15 years.

New Orleans reported its fewest murders citywide of any year since 1971 in 2019, but the murder rates in other parts of the state have slowly crept up. The state capital, Baton Rouge, logged its worst three-year stretch on record between 2017 and 2019, and the combined metropolitan parishes (such as Jefferson, East Baton Rouge and St. Tammany) reported more murders in 2019 than New Orleans for the first time on record.

“It is poverty and its twin sister or brother of mass incarceration,” said Marc Morial, who served as mayor of New Orleans from 1994 to 2002 and is now the National Urban League president. “And it’s easy access to guns.”

Louisiana and Mississippi tend to rank among the poorest states in the country. Louisiana has ranked in the bottom five in poverty rate in 37 of the last 40 years, including last or second to last 19 times over that span. Only Mississippi had a higher share of its population below the poverty line in 2019, according to census estimates.

There is not a clearly established causal link between poverty rates and murder rates, however. Things like high unemployment and poor education factor into the state’s poverty rate, which in turn could contribute to higher rates of murder in Louisiana.

Or it could be that the strongest correlation is to percent of blacks. From Wikipedia:

Louisiana is in a virtual tie for second with Georgia, but of course the Atlanta area has one of the country's biggest community of middle class blacks.

So the question is: why does Louisiana have more murders than Mississippi?

I could imagine all sorts of fascinating explanations involving the Code Napoleon or other Louisiana idiosyncrasies.

But then the NYT answers that: the data source they are using (which I wish they would link to) isn’t counting quite all the murders in Mississippi:

(Mississippi may now actually have more murders per capita than Louisiana. It’s the only state where individual agencies, not the state itself, submit data directly to the F.B.I. Mississippi had the nation’s second-highest murder rate in 2019, but only 29 percent of Mississippi agencies representing 54 percent of the state’s population reported data.)

The CDC also counts “Homicide Mortality by State.” Here’s its list for 2019:

So Mississippi had an even worse number of homicides per capita than Louisiana did in 2019, just like the lowbrow Black Share of the Population theory would predict.