Murder of Argentine Prosecutor Alberto Nisman Is a Warning about Iran

Americans should pay attention to the likely murder of special prosecutor Alberto Nisman in Argentina. There is more to the case than the investigation of a 1994 bombing of a Jewish community center in Buenos Aires that killed 85. The evidence leads to the involvement of Iran in jihadist attacks then and now.

The Buenos Aires terror attack in 1994 looked like a small preview of New York City in 2001. 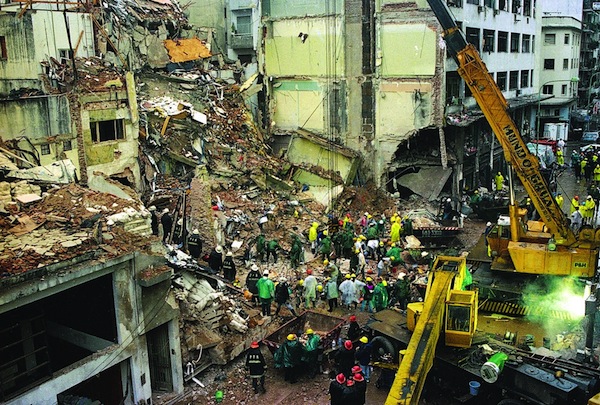 The death occurred just hours before Nisman was set to appear in front of a parliamentary committee to testify about the Argentine governments complicity in covering up Irans role in the 1994 attack in return for a favorable oil deal, among other things.

Claudia Rosett appeared on Fox News on Thursday to explain the background of Nismans findings, with a warning about how Irans terror network extends to the United States today.

CLAUDIA ROSETT: One of his warnings was that they infiltrate using agents sent as taxi drivers, as students, as diplomats, as businessmen, and they operate under those covers for years, but they are ready when Iran decides to execute an attack. And the New York City Police Department former head of intelligence testified in 2013 to Congress that they have found Iranian diplomats conducting what looked like hostile reconnaissance surveillance on New York City on more than half a dozen occasions over the past 12 years, including subway tracks, train tracks at Grand Central, the Wall Street heliport.

In other words, Alberto Nismans warning was not only a case about a long ago bombing in Argentina; it was a warning about terror attacks in the making today.

Keep this goal in mind as the Obama administration bends over backwards to get a nuclear treaty deal with Iran, which is a dangerous appeasement of a tireless enemy. Recent satellite photos have been reported showing new Iranian missiles capable of sending a warhead far beyond Europe yet Obama thinks the mullahs can be trusted not to nuke us when they are able.

In Rosetts detailed Forbes article on Tuesday, she quoted Nismans explanation of how Iranians were sent essentially as sleeper agents to Argentina, told to blend in as ordinary immigrants until a time when they were needed to “export the Islamic revolution.”

Beyond puzzling over the circumstances, is there any response the U.S. can make to the sudden death this past weekend of Argentine special prosecutor Alberto Nisman?

Nisman spent the past decade seeking justice for the victims of the 1994 terrorist bombing of a Buenos Aires Jewish community center, which killed 85 people and wounded many more. Nisman compiled a massive case, accusing Iran and its Lebanese terrorist affiliate, Hezbollah, of the attack. He indicted a member of Hezbollah and a number of former high-ranking Iranians officials. And he found himself increasingly at cross-purposes with the machinations of Argentina’s President Cristina Kirchner.

Last week, Nisman filed a criminal complaint almost 300 pages long, accusing Kirchner, her foreign minister Hector Timerman, and a number of others, of orchestrating a cover-up of Iran’s responsibility for the 1994 attack. A summary of the complaint, sent out last week by Nisman’s office, accused Kirchner of secretly cutting a deal with Iran to concoct a story that would exonerate Iran and its fugitives from the 1994 bombing, thus opening the way for Argentina to trade grain for Iranian oil, at the cost of “sacrificing a lengthy and legitimate quest for justice.”

Nisman was due to testify Monday to Argentina’s Congress about his allegations. He never made it. On the eve of his testimony, the 51-year-old Nisman was found dead in his Buenos Aires apartment, shot in the head.

Argentine officials swiftly declared that Nisman’s death looked like suicide. There’s plenty of skepticism about that. But with the case under Argentine jurisdiction, there may be little that Americans watching from afar can do. It is telling, perhaps, that even when Nisman was alive, the U.S. couldn’t do much on his behalf. In 2013, U.S. lawmakers invited Nisman to come to Washington, to testify about his findings at a House hearing on “Threat to the Homeland: Iran’s extending influence in the Western Hemishere.” Nisman wanted to go testify. But Argentina’s chief public prosecutor denied him permission, on grounds that it had nothing to do with the mission of the Argentine attorney general’s office.

At the hearing, panel chairman Rep. Jeff Duncan expressed his regret that Nisman could not come. Duncan noted that based on information that omitted Nisman’s findings, the State Department had recently reported that Iranian influence in Latin America and the Caribbean was “waning.” Duncan added: “In stark contrast to the State Department’s assessment, Nisman’s investigation revealed that Iran has infiltrated for decades large regions of Latin America through the establishment of clandestine intelligence stations and is ready to exploit its position to ‘execute terrorist attacks when the Iranian regime decides to do so.’ “

What America can do — and should do — is pay much closer heed to Nisman’s urgent warnings. For years, while laboring at an investigation that amassed more than a million pages of documents, he sounded the alarm over Iranian terror networks which he found extended way beyond Argentina — and in some cases all the way to the U.S.

Nisman’s investigation began with the Buenos Aires bombing, also known as the AMIA case (AMIA being the Spanish acronym for the Argentina Israelite Mutual Association). But as he dug deeper, he found that the techniques Iran used to infiltrate agents into Argentina and set the stage for the Buenos Aires attack were part of a network that was replicating itself in such countries as Brazil, Paraguay, Uruguay, Chile, Suriname, Trinidad & Tobago and Guyana.

The Guyana network had a major link to the man alleged by Nisman to be the main architect on the ground of the Buenos Aires AMIA bombing, the Iranian embassy’s cultural attache at the time, Mohsen Rabbani. The Guyana network also become involved in a 2007 terrorist plot in the U.S. — foiled in time by U.S. authorities — to blow up fuel lines and tanks at New York’s John F. Kennedy Airport. The man in the middle was a former member of the Guyana parliament, Abdul Kadir, who in 2010 was convicted in Brooklyn federal court of conspiring to commit a terrorist attack at JFK Airport, and sentenced to life in prison.

Nisman, in a 2013 indictment, as summarized in English by his office, described Rabbani as an important Iranian agent not only for the AMIA bombing, but as a pivotal figure in a general Iranian scheme of “infiltrating Latin-American countries” and “building local clandestine intelligence stations designed to sponsor, foster and execute terrorist attacks.” In detail, citing Iranian officials themselves, Nisman explained how this is part of Iran’s methods meant to “export the Islamic revolution.”

Nisman visited the U.S. a number of times during the many years of his investigation, and in March, 2009, I had the first of several chances to interview him in person. We met at a cafe in lower Manhattan. He had just come from talking with New York federal prosecutors about what he described as common concerns in investigating terrorist attacks. He was full of energy; young, dapper, wearing a red and silver tie, with a tie pin. He spoke some English, but was making the rounds with the help of an interpreter. I asked him if he had any worries about his own security. He replied that if he focused on that, he couldn’t do his job.

Over coffee, he detailed how the initial investigation into the 1994 AMIA bombing had been a fraud, and when he was assigned to the case in 2004 he had started all over again, working with a team of 40 people. He said that after the first two years of work, they had been able to prove that “the attack was organized, perpetrated and paid for by the higher authorities of Iran.” The decision to carry out the bombing, he said, was “made almost a year before the attack” — in 1993, in Iran.

He said his investigation had uncovered evidence that back in the 1980s, shortly after Iran’s 1979 Islamic revolution, Tehran’s regime had targeted Argentina as its main point of entry into Latin America. He said there were big two attractions for the Iranian regime: “Anti-semitism is part of the culture,” and Argentina in those days was willing to provide Iran with some nuclear technology. It was when Argentina, under pressure from the U.S., became less forthcoming on nuclear matters that Iran turned to terrorist attack.

He said that though many Iranians were sent as secret agents, they were assigned to particular ways of life, to settle in. “Some were just taxi drivers. Others went to university, especially in medicine.” He noted that medicine is a long-term career, and in Argentina, with free education, you could be a student for life. Still others came as businessmen. “These businesses did not sell any products, but they had lots of employees” he added.

Nisman also warned that when Iran’s regime is planning operations in a country, it uses the Iranian embassy as a spy center. That may sound unsurprising. But with Iran fielding a large diplomatic mission to the United Nations in New York, as well as a large Iranian Interests Section inside the Pakistan Embassy in Washington, Nisman’s observation deserves wide attention in the U.S. — especially in light of some items in testimony to Congress on March, 2012, by Mitchell D. Silber, former director of intelligence for the New York City Police Department. Silber in his written testimony stated: “We believe this is neither an idle nor a new threat. Between 2002 and 2010, the NYPD and federal authorities detected at least six events involving Iranian diplomatic personnel that we struggle to categorize as anything other than hostile reconnaissance of New York City.”

Iran, for its part, has repeatedly denied Nisman’s allegations, saying it is innocent of any involvement in the 1994 AMIA bombing in Buenos Aires. A typical statement, part of a series, can be found in a letter dated Oct. 6, 2010, from Iran’s ambassador to the U.N., to the president of the U.N. General Assembly. The ambassador, at some length, denounces Nisman’s investigation as “entirely faulty”; then adds that Iran stands ready, nonetheless, “to hold a constructive dialogue with the Argentine Government in a spirit of mutual respect in order to develop a clear understanding of each other’s positions, and seeks to find viable solutions for the misunderstandings arising from this case.”

Argentina no longer has Alberto Nisman to testify to what that jargon might mean.

But with his courage and years of toil in quest of justice, he has bequeathed us all a warning about where it goes.

Ms. Rosett is journalist-in-residence with the Foundation for Defense of Democracies, and heads its Investigative Reporting Project.