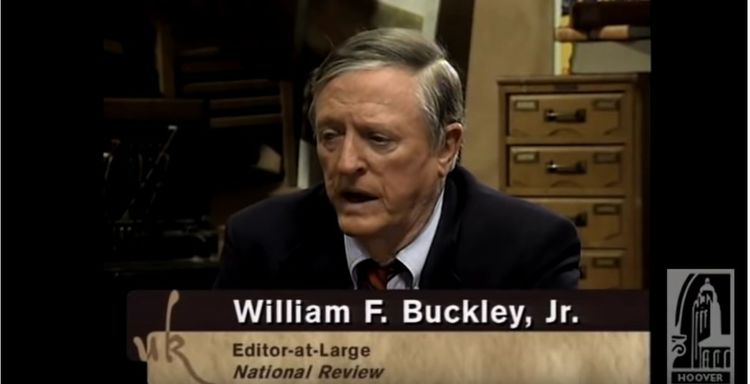 Then he quotes WFB admitting he was wrong about the early civil rights movement:

BUCKLEY Well, we opposed that act on the grounds that it asked for constitutional liberties, in an age in which constitutional liberties were being mobilized for this cause and that, rather with abandon. And we saw them addressing a situation which we doubted could be addressed in that way, but I have a very full perspective on life in the South in those days, and it was life that simply assumed that whatever headway blacks made would be made within their own culture and that federal interposition would be simply a renewal of the Civil War. That was wrong. But that deception was very, very engaging.

Reading that, I thought that all they'd have to do to make Buckley into Hubert Horatio Humphrey posthumously would be to have him apologize for "McCarthyism", but I turned to David Frum's diary and he reminded me that WFB had actually done this himself::

The finest of them is The Redhunter — a book that also offers the closest thing to the self-assessment of the young Buckley by the elder Buckley.

This reassessment involved, in effect, stabbing McCarthy posthumously in the back. That's what caused Peter Brimelow to write in 1999, in the now defunct Spintech Magazine: "McCarthy was right, even if Bill Buckley has forgotten." See Ann Coulter's Treason, and M. Stanton Evans's new book on McCarthy, both of which have been attacked by neoconservatives.