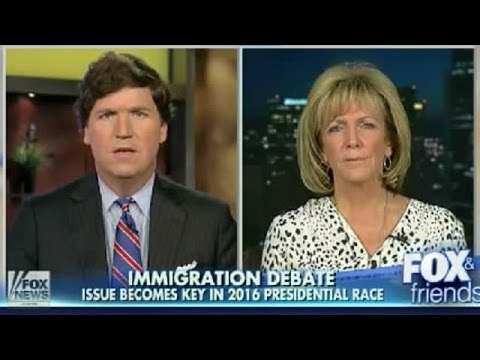 It’s tough sledding to be related to somebody killed by an illegal alien thug. The personal loss is bad enough, but the response from the government and liberal media is slim to none.

Illegal alien enthusiasts in the government used to pretend that steps would be taken to weed out the dangerous ones, but that was always a lie. Now they don’t even bother to pretend, like when the Senate Democrats blocked a bill punishing sanctuary cities a couple weeks ago.

Police Sergeant Brandon Mendoza was struck and killed in a head-on collision by drunk-driving illegal alien who had prior arrests for burglary and assaulting a police officer but was not deported.

In ultra-liberal San Francisco, the poster city of illegal alien crime after the July murder of Kate Steinle, the Board of Supervisors faked concern about the issue by debating non-binding resolutions about the policy the same day the Senate anti-sanctuary bill was blocked.

Interestingly, San Francisco’s Tuesday election for sheriff has been reported to hinge partially on the sanctuary issue. Incumbent Sheriff Ross Mirkarimi released Kate Steinle’s accused killer even though federal immigration officials requested the man be detained for deportation. Interestingly, a recent UC Berkeley government studies poll found a majority of Californians opposed sanctuary policies, including 73 percent of Democrats. So it’s possible Mirkarimi might get a bad surprise on Tuesday.

Brandon Mendoza’s mother Mary Ann Mendoza appeared on Fox News on Sunday to discuss the occasion of the remembrance day to recall the victims of illegal alien criminals.

TUCKER CARLSON: A critical issue in the 2016 presidential race is how the candidates will deal with illegal aliens entering this country, some of them committing deadly crimes. For hundreds of families the issue is more than political, it’s personal and decidedly tragic. Those families have declared today a national remembrance day; they’re going to hold vigils across the country in the memories of their loved ones killed by people who shouldn’t have been here in the first place.

Our next guest will be among those. Last year Mary Mendoza’s son police sergeant Brandon Mendoza of Mesa, Arizona, died after a drunk man in this country illegal for almost two decades crashed head-on into him. The man was wanted for a variety of crimes. Mrs. Mendoza joins us now to tell us how she is honoring the life of her son. Mrs. Mendoza, thanks for joining us this morning. Can you tell us how you’re honoring the life of your son Brandon?

MARY MENDOZA: Well today is National Remembrance Day, and we’re going to have a ceremony down at the Capitol in Phoenix at 5 p.m. this evening where we will gather and remember all the Arizona victims. And since Brandon’s death I’ve been trying to honor him as best I can, to carry on his his legacy and what he was doing in the neighborhood that he patrolled. We’re having the annual Mendoza Thanksgiving dinner to Boys and Girls Club that he started of several years ago. I’m trying to get scholarship funds out there because it was so important for him to have children get education and have goals in life.

CARLSON: What’s so especially upsetting about the story of your son is that he was killed by a man was only in this country illegally but wanted for a whole bunch of very serious crimes. He was drunk at the time he plowed into your son, and you raised these issues with a number of politicians and said look, we need to change the law to make it impossible for illegal aliens wanted for crimes to buy vehicles or have driver’s licenses. What kind of response did you get?

MENDOZA: I get none, and it’s very disheartening to see California just handing out driver’s licenses to illegals and also giving them the ability to vote on American issues. These people have no reason to be voting on any of our issues. They don’t belong here when they’re here illegally and especially if they’re criminals. I’m getting a very big education going into Washington and talking to several senators. Senator King from Iowa is a huge supporter of ours but they talk about the Democrats want them here for voter base and the Republicans want them here for cheap labor. So we’re basically hitting our heads against a wall.

CARLSON: So apart from Steve King the congressman from Iowa, have any other politicians heard your story and pledged to do something about it — change policies to perhaps prevent future tragedies like this?

MENDOZA: Congressman Gohmert from Texas has. Several other victim families, they’re reaching out to other politicians, but it’s very hard to get anybody to have a solid stance in Washington on this issue because it’s such a volatile issue right now. Donald Trump brought it up and believe me, he opened the door for us and for our stories to be heard. This is something we’ve been fighting for years. There’s been families who have been fighting for many many years prior to this happening to my son. I had no idea what a huge problem this was until it happened to me and I don’t want any other American family to go through what I’ve gone through.

CARLSON: What’s so distressing is how political it is. If you flip this around and your son had taken the life of an illegal alien in a so-called bias crime, that family would be at the White House meeting with the president. Has the president met with you?

MENDOZA: No. I’ve written three letters to the president. It’s very disheartening to see the people that he does have in the White House. When I was in Washington in July testifying at the Kate Steinle hearing, the Obamas had illegal students there to talk about the hardships they’ve overcome to get to college and the very next day illegal teachers at the White House, and we were blocks away from the White House, and we have been pleading with them to meet with us, to see our faces, to feel our pain, to hear our stories and maybe understand this problem a little better and do something about it for Americans.

CARLSON: It’s hard even to fathom the frustration you must be living through every day. Mary Mendoza, thanks a lot for taking time to join us this morning.