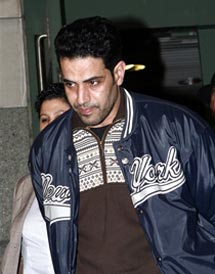 In March 2010, a immigrant from Morocco, Mbarek Lafrem (pictured), severely beat a nurse because she wouldn’t dance with him in a Manhattan bar. He followed her into the women’s restroom where he attempted to rape her and fractured her skull, eye socket, nose and jaw and cut her forehead, requiring 50 stitches.

Being a Muslim man, he blamed the woman for trying to defend herself - in the women’s restroom. He regarded any American woman behaving as a free individual was a prostitute and therefore not entitled to refuse him.

Many of the headlines avoided the thug’s cultural background. One of the worst was a two-fer insult from the New York Daily News: “Pennsylvania hardhat pleads guilty in beating of young nurse”.

Muslim immigration diversity is bad for all Americans, but it’s really bad news for women.

A construction worker admitted Monday that he beat a woman unconscious and tried to molest her in a bar bathroom, an attack she said occurred after she wouldn’t dance with him.

Mbarek Lafrem said nothing beyond brief answers to a judge’s questions as he pleaded guilty to assault and attempted sexual abuse. The March 2010 attack left the woman bloodied, half-undressed and wedged between a toilet and a bathroom stall divider in a sprawling midtown Manhattan lounge.

“He felt it was the right thing to do at this juncture,” Lafrem’s lawyer, Yana A. Roy, said after court.

Born in Morocco, the 32-year-old Lafrem told police he came to the United States in 2004. He was living in Norwood, Pa., but staying at a Manhattan hotel for a metal work job when he crossed paths with the woman, a nurse who was then 29, at Social. The three-story bar is near Manhattan’s theater district and the southern edge of Central Park.

“The attack on this woman was quick and brutal,” Manhattan District Attorney Cyrus R. Vance Jr. said in a statement Monday.

Lafrem twirled the woman briefly on the dance floor, but then she moved away and went to a women’s restroom on the second floor, authorities said.

Lafrem followed her, marched into a stall and hit her in the face when she screamed at him, prosecutors said.

She was found unconscious, with her pants inside-out and nearly pulled off, Assistant District Attorney Shanda Strain said. The woman had a broken jaw, broken eye socket and skull fractures, among other injuries, prosecutors said.

The Associated Press generally doesn’t identify people who report being sexually assaulted unless they agree to be named.

Lafrem fled after the attack, but co-workers called police after recognizing him in a surveillance video police released of a man walking down the street shortly after the attack, police said. Some of the woman’s blood was found in Lafrem’s hotel room, apparently because he’d had it on his clothing, prosecutors said.

Lafrem initially told police he went into the women’s bathroom by accident and threw her to the floor after she lashed out at him.