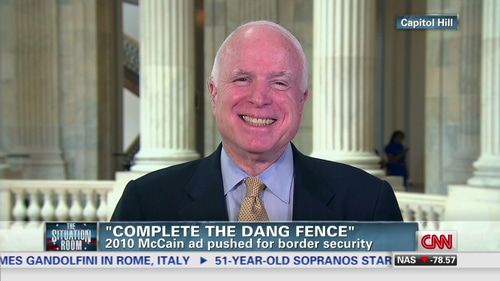 More On McCain's Ghost: His Immigration Views Weren't "Honestly And Morally Held", He'd Trim Them Every 6 Years To Get Re-Elected

Tom Rogan at the Washington Examiner seems to be a McCain worshipper, and he had this to say about what Michelle Malkin at CPAC

" How long will the America we grew up in remain good and great?" asked conservative commentator Michelle Malkin at CPAC 2019 on Friday.

Not that long, in my estimation, if Malkin and some of the attendees at this year's Conservative Political Action Conference set the nation's course. Because referring to conservatives who have supported immigration reforms she opposes, Malkin also said this during her speech:

Ghosts cannot defend themselves. But the honored dead deserve better than those of weak wit seeking wallets [This must be a typo, the word wallets means nothing here.] of unrighteous fury.

Sen. John McCain was not simply a tireless public servant, he was an American patriot who gave everything for his nation in war and peace. The Arizona Republican's views on immigration reform were honestly and morally held, whether you agreed or disagreed. Either way, he, and American honor, deserves far better than this putrid insult.

McCain's views weren't "honestly and morally held". He had to face primary challengers in 2004, and 2010, when he'd been an Amnesty supporter for years, and if you didn't like his immigration view, well, he had other views...until he was reelected. See, from the 2010 campaign

The most egregious example of this is his 2010 reelection, when he shot a video of himself with a border Sheriff saying "Build The Dang Fence".

This is McCain saying "Complete The Dang Fence," a campaign ad which received a lot of criticism, as an act of desperation:

This is McCain in Vanity Fair:

Then he added, unable to help himself, "By the way, I think the fence is least effective. But I'll build the goddamned fence if they want it."[Prisoner of Conscience, February 2007]

This is McCain in a 2007 debate, saying "America is still the land of opportunity, and it is a beacon of hope and liberty and, as Ronald Reagan said, a shining city on the hill,and we're not going to erect barriers and fences."

This a Young Republican who wasn't allowed to hold up a sign saying "Build The Fence" in the Republican National Convention—the Secret Service told him, on behalf of the McCain Campaign, to take it down:

So, which was the real McCain? The answer is that there never was a real McCain. Our final video is Peter Sellers on The Muppet Show as Queen Victoria. When Kermit tells him he can relax and be himself, Sellers replies:"There is no me. I do not exist. There used to be a me, but I had it surgically removed."