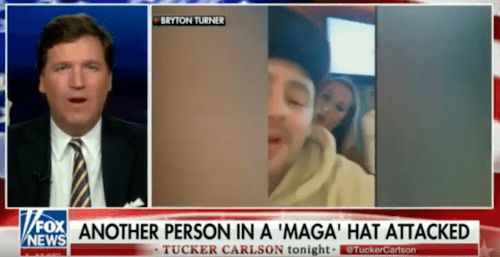 According to Steve Robinson, the executive producer of Howie Carr’s radio show, the Trump-hating illegal alien was pretty well established with identification:

Update: Rosiane Santos' real name is Rosiane Vieira-Desir, according to a law enforcement source. Despite being an illegal alien from Brazil, she has a valid MA drivers license and a social security number.

So Brazilian Rosiane Santos Vieira-Desir has gone to great effort to reside in America, but she appears to hate traditional residents like the MAGA hat wearer. It’s not that unusual a situation: many foreigners move here unlawfully to “have a better life” which means making more money, period, without understanding the combination of freedom and responsibility that makes America wealthy and successful. Hopefully she will be deported ASAP back to Brazil. 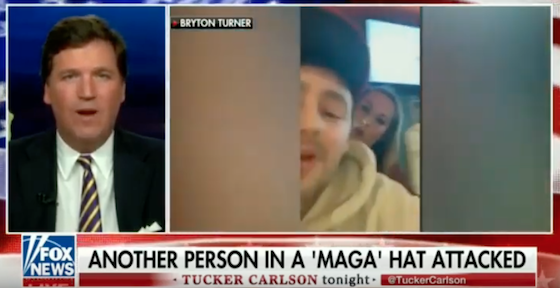 Howie Carr appeared with Tucker Carlson and noted the lack of interest in the case exhibited by many TV shows that like oddball crime stories.

TUCKER CARLSON: An illegal immigrant has been arrested after assaulting a man for wearing a “Make America Great” hat. Rosiane Santos flew into a rage when she saw the man with the hat at a restaurant. Her attack was caught on video. Here it is:

MAGA-HAT WEARER BRYTON TURNER: See this right there. This is the problem. Ignorant [bleep] people like this. I am just trying to sit here and eat a nice meal. Yes, yes, you see this? You see this? People like that. That’s the problem. She was trying to grab my hat in front of four officers and that’s smart. She is getting cuffed. Have a nice night in the cell, Rosie.

CARLSON: Well, after the event you just saw, Santos detained was detained by ICE which has not yet been banned by the Democrats. ICE said she was here illegally and has been for a long time. She overstayed tourist visa back in 1994. Howie Carr is the voice of New England, a radio show host in the region and he joins us tonight. Howie, this might be the perfect story.

HOWIE CARR: I would think so. This is a real hate crime with what you just saw, a video involving a MAGA hat. The only thing, it doesn’t fit the narrative. It is an American citizen being attacked by a woman who turns out to be illegal alien by her own admission, drunk. She says, “What are you doing in this Mexican restaurant wearing a MAGA hat?” And he says, “This is America. I can wear this hat wherever I please.”

You know, Tucker you would think, this has all of the elements. So I texted him tonight. His name is Bryton Turner; he was preparing for the hoisting exam, you know, he is in the trades. He has calluses on his hands. I guess that was really triggering the illegal alien and all of that stuff, not just the MAGA hat. And I said, “So, I guess you will be on with Robin Roberts tomorrow on “GMA” and then you’ll go on with Brooke Baldwin and she can say, “This is America in 2019.”

And Kamala Harris and Cory Booker, are they comparing this to a lynching? You know the old country song, you know, “When The Phone Didn’t Ring,” he knew it was CNN, MSNBC, “Good Morning America,” NBC — nobody called him. Nobody called him, Tucker, except for one group nationally. Well, two groups if you include my radio show, “Fox & Friends,” wants him on. Nobody else called him all day long.

CARLSON: Yes, so this is self-serving, but I have got to be honest. If they got rid of the few independent voices in media — and we’re one and you are one — it would just be a chorus singing the same tune, and that’s what they want. Trust me. Howie Carr, thank you very much.