More On Christianophobia/Christophobia: Why There's No Outcry 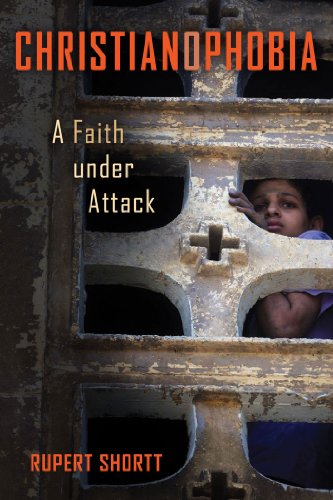 More about Rupert Shortt's book Christianophobia: A Faith Under Attack,which I mentioned below, with the caveat that we've been using the word "Christophobia" for years.

Alan Johnson interviews Rupert Shortt in the Telegraph:Why are we so quiet about Christianophobia? October 4th, 2013

It's wrong of Shortt to say of the "perceived sufferings and complaints of Muslims" that  "many of which I will be the first to say are justified." That kind of concession never helps.

He should say something like "We're talking (or rather not talking) about about a suicide bomber attacking a church,  killing 78 people, including 34 women and seven children,  you're screaming at the top of your lungs about someone looking at you sideways when you appear in public wearing a ninja mask." [Emphases added below,]

Talking to Rupert Shortt, the religion editor of the Times Literary Supplement and an intensely thoughtful man, I heard four big causes of our shameful quietism.

First, “I’m sorry to say there’s a bit of a hierarchy of victimhood here” he told me. “It’s just not very fashionable to be a persecuted Christian.” The New Atheism has played its role here.

Second, and one of the sources of this fashionable indifference, is what Shortt called "a bit of a liberal blind spot". He meant that while we are "very, very sensitised to the perceived sufferings and complaints of Muslims, many of which I will be the first to say are justified," we also tend to swallow whole a "highly questionable victimhood narrative of certain Islamists. The idea that Muslims are targeted and persecuted like no other group is a falsification of history that needs to be resisted." That we often fail to do that is one reason we also struggle to see anti-Christian hatred and persecution plain. It meshes with what Shortt calls the "self-lacerating element in Christian societies, probably born out of guilt over colonialism."

Third, there is that "turn the other cheek" thing. Shortt gave the example of a Christian church bombed in Kathmandu after which the survivors dusted themselves off and carried on. A friend of Shortt’s, a human rights monitor who went out there sometime later, was told by an astonished non-Christian local that, "if this had been a temple, if this had been a synagogue, if this had been a mosque, all hell would have broken loose, but it was a church".

Shortt was at once proud and frustrated about this stoicism: "I want to stress there’s something deeply admirable about that on one level. I think that ‘an eye for an eye’, ‘tit for tat’ mentality is only going to make matters worse and at some point in a conflict, the cycle needs to be broken. It’s a sign that they’re taking the teaching of Jesus seriously. So one level I take that as a source of pride.” But he was also deeply worried by this reaction. “At the same time, I don’t see why news of these sufferings should be muffled."

Fourth, and made possible by this muffling, there is "timidity on the part of Christian governments in the West when it comes to sticking up for their fellow believers". And surely this timidity is found in parts of the Church, too?

It’s a toxic mix: among non-believers there is historical ignorance, hierarchies of oppression, postcolonial guilt, and official timidity. On the part of many stoic Christians there is a forbearance and willingness to see virtue in suffering. Perhaps it is time to take the advice of a Jew instead. Silence, said the Auschwitz survivor Elie Wiesel, only encourages the tormentor, never the tormented.