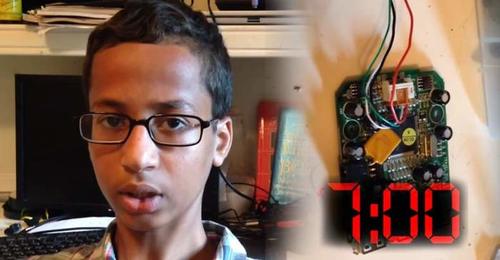 ‘We really need to fix this kind of mentality,’ says Ahmed Mohamed’s uncle

By now you’ve likely seen the headline: 14-year-old boy arrested for bringing a clock to school.

On Monday, grade nine student Ahmed Mohamed brought his homemade clock to his Irving, Texas, high school. He wanted to show it to his teachers. But when he did, he was handcuffed, fingerprinted and arrested after they mistook the clock for a bomb.

Overnight the story went viral and the outpouring of support for Ahmed is still trending across social media. Earlier this morning we reached Ahmed in Irving. He was in good spirits and overwhelmed by the support.

“I am feeling really amazed at how much attention I’ve been getting, all the support from all my fans around the world,” Ahmed tells As It Happens host Carol Off. …

Unfortunately our interview with Ahmed was cut short. But, we were able to reach his uncle.

Aldean Mohamed is also overwhelmed by the support but he is still searching for answers. …

When asked about one officer who reportedly remarked ‘Yup, that’s who I thought it was,” when he first saw Ahmed, Aldean explains, “it’s kind of discrimination you know, when you say my name is Ahmed.”

He adds, “we really need to fix this kind of mentality.”

But, he feels the real failure is that no one intervened and checked the clock, especially the police.

“Look at it and check it out, you are police, anyone, even a teenager will know, or even a four or five-year-old knows the difference between a clock and a bomb.”

Aldean admits that the family is still processing all the attention and that the events will be a big change for Ahmed.

“This has touched my heart…Yes, we are Muslim but we live in America for many years…What can we say? Really, we love America.”

A commenter did a little detective work online and found at Corporation Wiki this firm recently registered with the name of Aldean Mohamed as a director.

Now it could be that this is a different Aldean Mohamed.

But it refers to North Texas and to Sudanese, both of which check out.

And “Twin Towers” just sounds like this extended family’s wacky, edgy, publicity-seeking sense of humor, like participating as the defense in Rev. Terry Jones’ trial of whether the Koran should be burned, running for president of Sudan while living in Texas, or constructing a shoddy mock-up of a briefcase bomb not yet loaded with explosives.