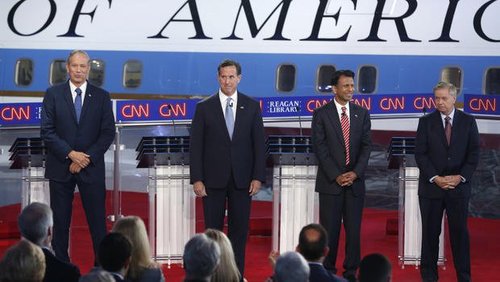 Santorum refused to criticize Trump, talked about the effect of mass immigration on American workers, discussed the entry/exit tracking or the lack thereof, and criticized the Dubya presidency.

Santorum made an excellent point here about how the discussion about what to do with illegals is not the primary question - it's what to do for American workers.

..this is really the interesting thing about this whole debate.  This debate should not be about what we're gonna  do with someone who's  here illegally.   This debate should be about , well, what every other debate on  every  other policy issue is in America - what's in the best interest  of hardworking Americans?  What's in the best interest of our country? We've had a focus - because the other side has set up for us -  here is who we have to be concerned about on the issue of immigration and someone who is here illegally and their family, what are we going to do about it? A great leader will see that the objective of every law in America is to do what's  in the best interest of America. And what's in the best interest of America  right now is to look at wages, look at employment among wage earners, 70-90% of people who have come to this country  (35 million over the last twenty years)   are wage earners that are holding wages down , taking jobs away from America.

This statement makes it sound as though Santorum has been reading our own Ed Rubenstein;

If you look at, from the year 2000 to the year 2014, there're 5.7 million net new jobs created. What percentage of those jobs are held by people who weren't born here? The answer is all of them.

The fact is, American workers are — are getting hurt by immigration...

Graham, the consummate GOP insider, was a very smooth talker in the debate.   In the exchange above, Graham ridicules Santorum for not getting Democratic support for a bill he'd proposed as a senator. But later, when Jindal criticized the GOP congressional leadership for not fighting Obama, Graham basically said their hands were tied, they couldn't do it.

Elsewhere, Rick Santorum has  proposed a 25% reduction in legal immigration. Of course we'd like to reduce it even more, but at least he's moving in the right direction.

Santorum has the number one rating on Numbers USA's candidate grid, with an A.  Not only that, but Santorum is aware of Numbers USA and its rating system, and in an interview Santorum brought it up as something positive to commend his campaign.

Wouldn't it be great to see the candidates compete with each other on how tough they could be on immigration?