The black cop really pounded the Mexican jerk in the gray t-shirt after his comrade in the red bandana tried to reach up and steal the black cop’s gun (at about 0:04 to 0:06): 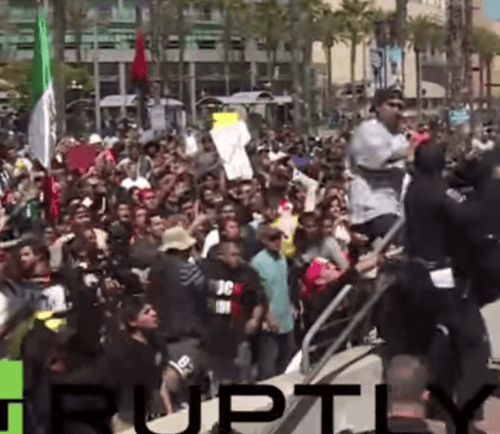 Cops really, really don’t like it when you grab for their guns.

The white cops then try to get their partner to calm down a little.

Ross Douthat writes on what it would take to elect Trump:

A lot of people would start with the economy, where the idea that we’re just one financial meltdown away from a Trump presidency has become the pessimist’s conventional wisdom lately.

I’m not so sure that’s the right way to look at Trump’s appeal, however. He’s done well with working-class voters, and his promise to bring back jobs has resonated, but it’s not as if he’s been riding to victory amid a swooning economy, or even an economy with the high unemployment rates that prevailed in 2012. Like Bernie Sanders, his populism has fed on stagnation and diminished expectations, not panic or collapse: Its success is the fruit of an unsatisfying stability, not a vertiginous decline. A real collapse might actually not be good for his prospects, since the idea that America needs him to “blow things up” in Washington might seem considerably less appealing if the world economy were actually blowing up on its own.

In other words, Trump benefits more from things continuing on the course they are on.

The same logic might hold for a mass-casualty terrorist attack on American soil, another oft-cited Trump-versus-Clinton black swan. …

What Trump benefits most from, I suspect, is a more limited sense that things are out of control — a feeling of anxiety about the world that pulses through your TV set or your computer screen but hasn’t yet hit your neighborhood or family or bank account directly.

You left out more rioting by the left.

The Administration has been egging on urban unrest by blacks, which has already led to two outbreaks of undocumented shopping in Ferguson and a big one in Baltimore. And the media have been urging on anti-Trump rioting by supporters of illegal immigration, as we saw again this week. The press has been spinning the anti-Trump mobs as Trump is causing the violence against his own supporters, but in an age when smartphone video goes viral, that kind of propaganda power is harder to maintain than in the past.

I doubt that white Bernie Bros will riot against Hillary at the Democratic Convention, but that’s not impossible either.

George Soros should pay his minions to spend the next six months at the beach rather than cost Hillary the election.