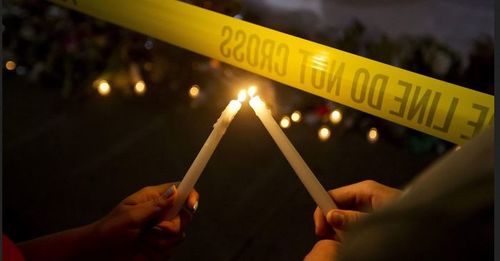 The murderer who perpetrated this Charleston black church massacre appears to have intended to maximize publicity for himself by pushing every conceivable hot button of the mainstream media in the fashion that would generate the most unending coverage of this Teachable Moment.

Back in 2012, I wrote a Taki’s Magazine column, “Monsters of Egotism” about the rise of mass shootings and the kind of (thankfully, rare) guys who pursue fame through slaughter.

Mass shootings have been a recognized phenomenon in the US since Charles Whitman went up the tower at the U. of Texas with a rifle in 1966 and entered Baby Boomer lore.

That’s about as far back as I can remember, so I can’t tell you if these kinds of horrible events happened just as regularly before 1966. …

Yet it’s also plausible that the general low level of crime seen from the mid-1930s to the mid-1960s included mass murders and that Charles Whitman really did mark a turning point.

We see something similar with serial killers. In his recent book Popular Crime, baseball statistician Bill James pointed out that the police didn’t much admit to the existence of the category of serial killer until Ted Bundy’s exploits in 1980. The press, public, and artists had become fascinated by the idea since the Boston Strangler in the mid-1960s, but cops mostly stuck to their training that random killers didn’t exist.

On the other hand, James’s research suggests that police hadn’t been that far off. He was able to identify a few early serial killers, but they were uncommon until late in the 1960s, when, as with so much else, things changed.

Why? I don’t know. One possible explanation for the spread of mass shooters is feedback effects. Perhaps the urge to be a star has expanded as the technology grew to accommodate it. In the song “James Dean,” the Eagles sang, “And I know my life would look all right if I could see it on the silver screen.” (More subtly, the true-crime genre of literature didn’t exist until Truman Capote’s famous 1966 book In Cold Blood.)

Creeps who have been ignored because there is something wrong with them try to make themselves interesting with a gun.

Bill James states that after the tawdry media circus of the 1935 trial of the Lindbergh kidnapper, American press barons reached a gentleman’s agreement to improve the tone of their newspapers by mutually forswearing tabloid crime coverage. He argues that this lack of attention paid to crime helped American elites become liberal and unserious about the cost of crime, paving the way for the 1960s rise in crime.

On the other hand, this cartel against sensationalism may also have discouraged those who might have sought publicity through crime. If your murder spree would only get you below-the-fold coverage, well, maybe it wasn’t worth shooting all those innocent people after all. By the 1960s, though, the rise of live local TV news began to offer new avenues for the sort of fame Whitman pioneered.

The mass killers who become famous seem to generally be monsters of egotism.

There are a lot of people with a lot of problems out there, but even shooters very, very rarely randomly kill large numbers in a bid for our attention.

In 2010 I read through all 2,600 homicides in Los Angeles County in the three preceding years.There were more than a few cases of a son killing his mother, then himself, but no cases of the killer shooting a few dozen schoolchildren in between. …

The good news is that mass murder’s various flavors get boring after a while. For instance, nobody goes postal anymore.

U.S. Post Office employees shooting several of their coworkers was a Thing in the late 20th Century. It’s probably not a Thing anymore.

But almost immediately, high-school slaughters died out for years as even the little cretins who might have shot up their classmates figured out that Columbine had been the box-office peak, The Dark Knight of the series, and it was all downhill from there.

This symbiotic relationship between the mass media and mass murderers has many random elements, but some people are always on the lookout for a good case that can be used to push the agenda, which at the moment is gun control.

Not all mass shootings are equally exploitable by the media, however. Remember the middle-aged Korean male nursing student with the seemingly memorable name One Goh who murdered seven people last April?

Sometimes the press jumps out ahead of the facts. For example, after the GOP retook the House in 2010, many instantly assumed that the Tucson shooter was a Sarah Palin or Glenn Beck fan. It turned out that was wholly wishful thinking. But then, you haven’t heard much from Sarah Palin or Glenn Beck lately, have you? (Holding the megaphone means never having to say you are sorry.)

Other slaughters raise tricky issues. For example, the shooting at the first night of the last Batman movie had potential, what with suspicions that director Christopher Nolan is some kind of conservative. But he’s been prudent in his statements over the years, and it would have been much too hard to explain.

A couple of years ago, some reporters tried to jump on the story of the former Connecticut mass-murder record-holder Omar Thornton, a black thief who murdered eight white men in 2010 for being “racist.” More than a few newshounds assumed it was their duty to document just how badly the victims had it coming.

But within a week, wiser heads in -the press prevailed: This is not the story of racial hate and mass murder you’re looking for. It’s supposed to be the white guy killing eight blacks, not vice-versa. Even though Thornton used the magic R-word, he was, when you stop and think about it, a mass murderer. We don’t want anybody to hear about this shooting and start thinking it’s maybe time for a national conversation on whether the mania about racists under the bed is getting kind of old. So, ixnay on the Omar.But some shootings live on if they can be put to good use in advancing narratives. For example, the immortal Columbine massacre won Michael Moore an Oscar for explaining how we need tougher gun-control laws to stop those crazed rural rednecks from murdering everybody. In a celebrated scene, Moore ambushed NRA leader Charlton Heston to ask him why the US had a higher murder rate than countries such as Canada, causing the aged movie star to say,“Well, we probably have more mixed ethnicity here.”

“I was shocked when he said that.…There’s a racial thread that goes through this film and leads up to that moment. The underpinning of our collective fear is based on racism. So, for him to volunteer this….”