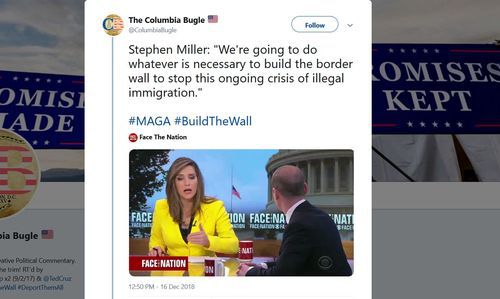 There was a lot of brave talk over the past few days that President Trump was going to shut down the government in order to force a confrontation about border wall funding.

Stephen Miller: "We're going to do whatever is necessary to build the border wall to stop this ongoing crisis of illegal immigration." #MAGA #BuildTheWall pic.twitter.com/tXlIkzoYhc

Of course, for some unfathomable reason, no one is mentioning a remittance tax, which would sidestep the issue of making American taxpayers pay for the wall and keep the president's campaign promise. Still, it's something.

However, The Washington Post now reports the Trump Administration is seeking ways to avoid a government shutdown and will cave on fighting for a border wall.

The White House wants to avoid a partial government shutdown and has found other ways to get the border wall President Trump is demanding, spokeswoman Sarah Sanders said Tuesday...

Sanders said the White House was exploring other funding sources and believed it could be legally done.

“There are certainly a number of different funding sources that we’ve identified that we can use, that we can couple with money that would be given through congressional appropriations that would help us get to that $5 billion that the president needs in order to protect our border,” she said.

Sanders’s comments come after a series of miscalculations by Republicans in recent days over how to try and get Democrats to sign onto $5 billion to pay for the construction of a wall along the Mexico border.

Last week, Trump said he would be “proud” to shut down the government over the issue, a statement that congressional Republicans openly said muddied their messaging.

Contrary to some reports, this isn't surrender. But it's certainly "muddled messaging." It shows that the GOP is not united in pushing for a border wall. Once again, congressional Republicans seem to be getting in the way of the White House. Obviously, this is why President Trump should have pushed for a border wall the second he stepped into office. However, we are where we are.

Certainly, it would be a good thing if President Trump could flip the script on the Democrats by using some of those "other ways" to get to the five billion dollars to fund the wall. Yet at this point, this mixed messaging on a potential shutdown makes him look weak, especially when the reason Republicans can't work hard on a budget solution is because they are focused on a bill to let more criminals out of prison. Once gets the sense that this is the last straw for a number of Trump voters who elected him specifically to prevent actions like this.

And the funny thing is, at least if Trump is going to cave on his lifelong view on crime (called for death penalty 4 the very people he's releasing), why not get a concession on border. But no, he will sign both bills for free. There was a term for that and it rhymed with "luck"

The next couple weeks may be make or break for the entire administration, as President Trump will not have a base willing to fight for him on impeachment if he doesn't give them a reason to support him.