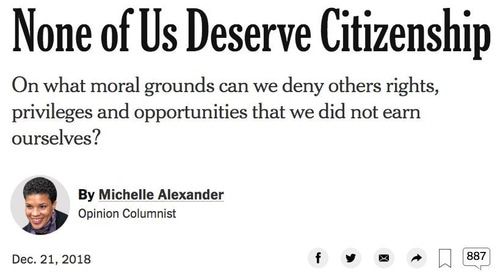 Michelle Alexander In The NYT: "None of Us Deserve Citizenship"

None of Us Deserve Citizenship
On what moral grounds can we deny others rights, privileges and opportunities that we did not earn ourselves?

Answering these questions may be easy legally, but they’re more difficult morally. After all, none of us born here did anything to deserve our citizenship. On what moral grounds can we deny others rights, privileges and opportunities that we did not earn ourselves?

… “Home is not something I should have to earn,” he wrote. It’s something we all have a right to.

Many people will sympathize with Mr. Vargas’s story but recoil at his bold conclusion, as it seems to imply support for open borders — a position that no Republican or Democratic member of Congress supports or even takes seriously.

This reaction seems misplaced. The deeper question raised isn’t whether our borders should be open or closed (generally a false dichotomy) but rather how we ought to manage immigration in a manner that honors the dignity, humanity and legitimate interests of all concerned.

Reaching for a radically more humane immigration system is not pie-in-the-sky, utopian dreaming. But it does require a certain measure of humility on the part of those of us who have benefited from birthright citizenship. Rather than viewing immigrants as seeking something that we, Americans, have a moral right to withhold from them, we ought to begin by acknowledging that none of us who were born here did anything to deserve our citizenship, and yet all of us — no matter where we were born — deserve compassion and basic human rights.

It’s tempting to imagine that our position as gatekeepers is morally sound — since we’re frequently reminded that “all nations have a right to defend their borders” — but our relationship to those who are fleeing poverty and violence is morally complex. Not only does birthright citizenship bestow upon us a privileged status that we haven’t earned; our nation’s unparalleled wealth and power, as well as our actual borders, lack a sturdy moral foundation. But for slavery, genocide and colonization, we would not be the wealthiest, most powerful nation in the world — in fact, our nation would not even exist. This is not hyperbole; it’s history. There’s good reason some Mexicans say: “We didn’t cross the border. The border crossed us.” That is, in fact, what happened.

Of course, it can be argued that virtually all modern nation-states were created through violence, exploitation and war. But we claim to be unlike most nation-states; indeed, we insist that we’re “exceptional.”

I feel some Statue of Liberty poem coming on …

We are the only nation that advertises itself as “a nation of immigrants” and the “land of the free,” an advertising campaign complete with a Statute of Liberty whose pedestal includes a plaque of a poem that reads in part:

“Give me your tired, your poor,
Your huddled masses yearning to breathe free,
The wretched refuse of your teeming shore.
Send these, the homeless, tempest-tost to me,
I lift my lamp beside the golden door!”

The founders of our nation did not merely wax poetic about the virtues of liberty; our nation was birthed by a Declaration of Independence… If this is true, on what moral grounds can we greet immigrants with tear gas and lock them in for-profit detention camps, or build walls against the huddled masses yearning to breathe free? After all, what was Ms. Serrano-Hernandez doing if not pursuing life, liberty and happiness for herself and her family? Did she not display a level of courage, fortitude and determination to win freedom for herself and those she loved comparable to that of those who helped birth our nation?

Michelle Alexander became a New York Times columnist in 2018. She is a civil rights lawyer and advocate, legal scholar and author of “The New Jim Crow: Mass Incarceration in the Age of Colorblindness.”