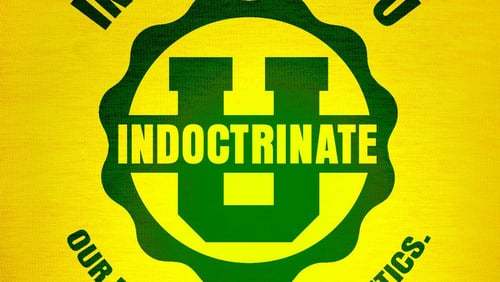 I took Mrs. Anonymous Attorney to the Kennedy Center last night for the premiere of Indoctrinate U, a new film documentary on political correctness run amok on America's college campuses. Pre-release reviewers haven't missed how Evan Maloney, the film's maker, acts as the right's answer to Michael Moore, confronting officials outside their offices with a boom mike and camera crew, only to be escorted away by the police most of the time.

Point made: college officials oversee a totalitarian atmosphere of left-wing orthodoxy that holds up "diversity" and "tolerance" as gods, but there's no real intellectual diversity and breathtakingly little "tolerance" for conservatives, libertarians, Christians, or whites. It's near-impossible to get them on camera to explain themselves, and when they do, they sound very much like people so pickled by years stewing in groupthink that they don't realize how ridiculous they sound — or have any idea how to parry with a questioner. A Bucknell professor named Geoff Schneider catches himself referring to "sentencing" a student to sensitivity training, and the odious Noel Ignatiev of Harvard sounded like a talking Onion parody with comments like "whiteness must be destroyed."

Meanwhile, the real "oppressed" are the dissenting students who are shut up and shut down by the PC apparatus. One white student at Cal Poly San Luis Obispo found himself threatened with expulsion and forced psychological treatment for posting a flyer about a black conservative speaker. There's incredible footage of Ward Connerly being shouted down by "pro-diversity" students, and near-violence breaks out when the Army Corps of Engineers shows up to a campus job fair.

I was disappointed not to see footage of the Minutemen fracas at Columbia. Readers looking for an immigration disaster documentary should check out Byron Jost's "Line in the Sand."

There's a hilarious sequence the movie where Maloney sets out to find the "men's center" by talking to the sour-faced feminists at campus women's centers. Appearances by K.C. Johnson, Glenn Reynolds (aka Instapundit) and John McWhorter give the film a boost.

Maloney's effort is fast-paced and funny, if late: Someone like David Horowitz (who's not in the film) was chronicling this scandal in "Heterodoxy" more than ten years ago. It also avoids truly politically incorrect territories like racial difference (Jared Taylor's encounters at a Canadian college or the reactions to Michael Levin at CUNY would have been good examples) and neoconservatism as an ethnically Jewish movement (witness the SPLC's "investigation" of Kevin MacDonald—though one fears what would happen if a documentarist showed up to the SPLC's surely heavily-guarded stronghold in Alabama).

Still, Maloney is the first to bring the phenomenon to the screen, and it's definitely worth seeing.