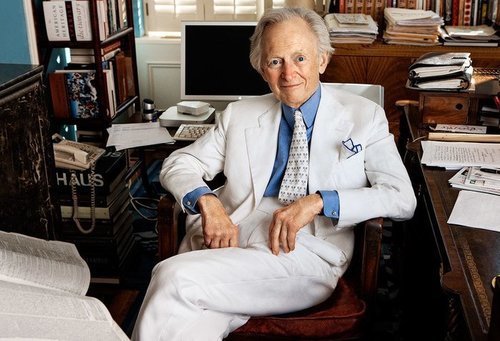 Michael Lewis on Tom Wolfe as a Southern Conservative

One of the little-noticed patterns of the cultural world is that a striking fraction of the most influential figures, especially in the comic arts, are conservatives if not reactionaries.

Michael Lewis of New Orleans, the most obvious journalistic / literary successor of Tom Wolfe of Richmond, writes a good-humored analysis of Wolfe’s origins for Vanity Fair:

… Thomas Kennerly Wolfe Jr. was born on March 2, 1930, and grew up in Richmond, Virginia, the son of a conservative, God-respectful southern editor of an agricultural trade magazine.

The Southern Planter, by the way.

Back in 2012 I wrote in VDARE in my review of Wolfe’s novel Back to Blood, which features a young newspaper reporter named John Smith obviously modeled on Wolfe (John Smith of Jamestown in 1607 was the original Virginia WASP):

Topping (the newspaper editor) reflects upon the fictional John Smith, and journalists in general:

If you ask me, newspaper reporters are created at age six when they first go to school. In the schoolyard boys immediately divide into two types. Immediately! There are those who have the will to be daring and dominate, and those who don’t have it. … But there are boys from the weaker side of the divide who grow up with the same dreams as the stronger … The boy standing before me, John Smith, is one of them. They, too, dream of power, money, fame, and beautiful lovers. …

Boys like this kid grow up instinctively realizing that language is like … a sword or a gun. Used skillfully, it has the power to … well, not so much achieve things as to tear things down—including people … including the boys who came out on the strong side of the sheerly dividing line.

Hey, that’s what liberals are! Ideology? Economics? Social justice? Those are nothing but their prom outfits. Their politics were set for life in the schoolyard at age six. They were the weak, and forever after they resented the strong. That’s why so many journalists are liberals! The very same schoolyard events that pushed them toward the written word … pushed them toward “liberalism.”

I suspect, however, that Tom Wolfe, much as he resembles John Smith, was never a liberal. I’d like to see him write a memoir. Wolfe’s first three decades—his upbringing in Virginia, his Ph.D. at Yale, and his reporting in Cuba during the Revolution—remain obscure, probably both for personal and political reasons. Wolfe’s friend Ed Hayes, who was the model for Killian, Sherman McCoy’s street smart defense lawyer in Bonfire, has said:

“He’s the grandson of a Confederate rifleman and grew up with the sense of the Lost Cause, of glorious doomed charges at Gettysburg, of a sense of personal honor and what constitutes masculinity that has largely been rejected by the urban intellectual elite of the Northeast.”

Home was never something he was looking to get away from; it was never even something he was looking to pretend he was looking to get away from. He was accepted at Princeton but chose to attend Washington and Lee, to remain close to home. Every now and then one of his teachers would note that he had a way with words, and some artistic talent, but artistic ambition, for a conservative southern male in the 1950s or really any other time, was too vague and impractical to indulge. After college, he took the advice of his professor and went to Yale, for a doctorate in American studies—and right up to this point in his life there isn’t a trace of institutional rebellion in him. He pitches for the baseball team, pleases his teachers, has an ordinary, not artistic, group of pals, and is devoted to his mother and father.

… The moment he leaves the South, something comes over him. Whatever it is, the feeling seems to be heightened by the sight of a blank sheet of paper. For the first time in his life, it appears, Tom Wolfe has been provoked. He has left home and found, on the East Coast, the perpetual revolt of High Culture against God, Country, and Tradition. He happens to have landed in a time and place in which art—like the economy that supports it—is essentially patricidal.

It’s all about tearing up and replacing what came before. The young Tom Wolfe is intellectually equipped to join some fashionable creative movement and set himself in opposition to God, Country, and Tradition; emotionally, not so much. He doesn’t use his new experience of East Coast sophisticates to distance himself from his southern conservative upbringing; instead he uses his upbringing to distance himself from the new experience. He picks for his Ph.D. dissertation topic the Communist influences on American writers, 1928–1942. From their response to it, the Yale professors, who would have approved the topic in advance, had no idea of the spirit in which Wolfe intended to approach it:

I am personally acutely sorry to have to write you this letter but I want to inform you in advance that all of your readers reports have come in, and … I am sorry to say I anticipate that the thesis will not be recommended for the degree…. The tone was not objective but was consistently slanted to disparage the writers under consideration and to present them in a bad light even when the evidence did not warrant this.” [Letter from Yale dean to T.W., May 19, 1956.]

To this comes appended the genuinely shocked reviews of three Yale professors. It’s as if they can’t quite believe this seemingly sweet-natured and well-mannered southern boy has gone off half cocked and ridiculed some of the biggest names in American literature. The Yale grad student had treated the deeply held political conviction of these great American artists as—well, as a ploy in a game of status seeking. This student seemed to have gone out of his way to turn these serious American intellectuals into figures of fun.

I’ve been reading Tom Wolfe for 40 years, but I was primed to be a Tom Wolfe fan almost a decade before then. Back in the later 1960s whenever my mother took me to a doctor’s or dentist’s appointment on Riverside Drive in Toluca Lake, CA, I would insist that we walk down to the Barris Kustom Shop to see the krazy kustom cars, like Adam West’s Batmobile.

Not surprisingly, Wolfe’s 1963 breakthrough in Esquire that launched the New Journalism, The Kandy-Kolored Tangerine-Flake Streamlined Baby, had prominently featured George Barris. Riverside Drive in Toluca Lake (home to the famous 1949 Bob’s Big Boy), with its weird combination of gentility and science fiction craziness, is the epitome of Wolfe’s key concept of the postwar Happiness Explosion.