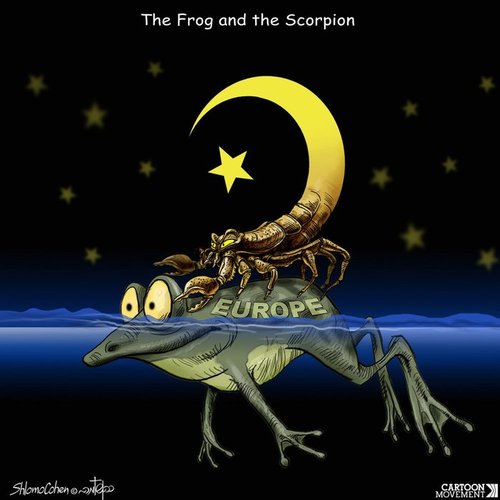 The Scorpion and the Frog In Germany

NYT op-ed columnist Roger Cohen argues for importing vast numbers of anti-Semites into Europe as payback for Christendom’s past anti-Semitism. Or something:

MILAN — “Indifference” is the word engraved on the stark wall at the entrance to Milan’s Holocaust memorial, housed beneath the central railway station from which Jews were deported to Auschwitz and other Nazi camps. The premises vibrate when trains depart overhead, as if mirroring the shudder the place provokes.

A survivor of the deportation, Liliana Segre, whose father, Alberto, was killed at Auschwitz, suggested that “indifference” was the most appropriate word to greet visitors to the memorial, which opened in 2013. Nobody had cared when, from 1943 onward, Jews were hauled through the elegant avenues of Milan to the station. They were unloaded from trucks and packed into wooden boxcars made to transport six horses but used for some 80 doomed human beings.

So it was perhaps inevitable that when Roberto Jarach, the vice president of the memorial, was asked if he could help with Milan’s refugee crisis, he saw that word flash through his mind. As hundreds of desperate refugees converged daily on Milan’s central station — opened during the rule of the Fascist dictator Benito Mussolini — the memorial could not show “indifference.”

“I immediately came down here to measure the space we have,” Jarach told me. “These people hardly know where they are.”

And so, for a few months now, camp beds have been set out every night to the left of the main entrance. In all, about 3,500 people have been sheltered, mainly Eritreans, but also Syrians and Afghans, part of the largest movement of refugees and migrants since the end of World War II.

… They leave the next morning, usually headed north toward Germany.

There is no direct analogy between the situation of millions of refugees today and the Jews who were deported from Milan’s Platform 21 (as the memorial is also known). …

Still, there are echoes, not least in that word, indifference.

The indifference of Hungary, with its self-appointed little exercise in bigotry: the defense of Europe as Christian Club. The indifference of Britain, where the prime minister speaks of “swarms,” the foreign secretary of “desperate migrants marauding,” and the home secretary of threats “to a cohesive society.” The indifference of a Europe that cannot rouse itself to establish adequate legal routes to refugee status that would stem trafficking that has left about 3,000 people dead this year in the Mediterranean.

Then there is the indifference of an America that seems to have forgotten its role as haven for refugees of every stripe. …

Another echo, for Jews, lies in their own situation in Europe a little over a century ago. They were often marginalized. As Rabbi Julia Neuberger pointed out in a recent sermon at the West London Synagogue, around 150,000 Jews, often fleeing pogroms, arrived in Britain between 1881 and 1914. An anti-immigrant group called the British Brothers’ League declared then that Britain could not become “the dumping ground for the scum of Europe.”

Yesterday’s “scum” often proves to be the invigorating lifeblood of renewal. Churchill opposed the Aliens’ Act of 1905, designed to control Jewish immigration, on the grounds that “free entry and asylum” were practices from which Britain “has so greatly gained.”

Europe is awash in small-mindedness, prejudice and amnesia. On Syria, the United States is not far behind.

Jarach, whose Jewish family arrived in Milan in the late 19th century, is assisted by Adhil Rabhi, a Moroccan immigrant. They showed me around the memorial, explained how each boxcar was filled with Jews and then shunted to an elevator that took them up to the platform.

Nobody saw the Jews. Nobody wanted to see them. Indifference kills. As Syria demonstrates.

The title of this post is of course a reference to the modern fable of self-destructive spite usually associated with the Middle East, as in this retelling by Bob Schieffer of CBS News in 2006:

When the war broke out in the Middle East, I thought about the old story of the frog and the scorpion who were trying to cross a river there.

The scorpion couldn’t swim and the frog was lost, so the scorpion proposed a deal: Give me a ride on your back and I’ll show you the way.

The frog agreed and the trip went fine until they got to the middle of the river and the scorpion stung the frog. As they were sinking, the frog asked in his dying breath, “why would you do that?”

To which the scorpion replied, “because it is the Middle East.”