Mexico Is Not Ready for Any Public Health Crisis

There is one good aspect to the coronavirus event, and that is the rediscovery of borders: They are so handy in keeping out people who might cause the preventable deaths of Americans from disease.

Unfortunately we face the Third World to our south and the border there is inadequate.

Perhaps worse is the cavalier attitude of Mexico toward the contagion. Life goes on as normal there in the corrupt and clueless nation. President Lopez Obrador leads the way, still hugging supporters at campaign rallies and remarking, “the pandemics… are not going to do anything to us.”

Mexicans have long thought of themselves as superior for some odd reason, but this latest delusion is a bit much.

Details were recently described in The Federalist:

The disease is going to spread fast in Mexico, where a weak and corrupt state has made almost no preparations.

As much of the world goes into various stages of lockdown because of the Wuhan coronavirus, Mexico is in denial. The government’s response thus far has been to downplay the risks and carry on with life as normal. Mexican officialdom has taken almost no steps to contain the virus or prepare for an outbreak, despite a warning last week from the deputy health minister that a widespread outbreak is inevitable and that community transmission could begin there in a matter of weeks.

When that happens—not if, when—things are going to deteriorate very quickly in Mexico. The outbreak will almost certainly affect the entire country, cripple the economy, and threaten to bring down an already weak and corrupt government. . . . 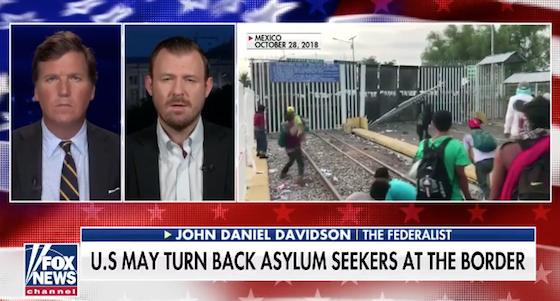 Davidson thinks things could get messy when the Mexican public decides the disease is a problem and they would like some nice American healthcare.

TUCKER CARLSON: Well, as the coronavirus pandemic spreads, nations around the world are rediscovering the value of borders. Even Canada has closed itself off from outsiders.

Of course, if we wanted to shut our border, it would be difficult along the 2,000-mile border with Mexico, it would be impossible.

According to the New York Times, the Border Patrol will soon be instructed to immediately return all people detained at the border, even without a hearing.

But even then, if Mexico was hit hard by coronavirus outbreak, are we remotely ready for the ramifications of what could happen next?

John Daniel Davidson wrote a piece about this recently for The Federalist. We’re happy to have him on tonight. John, thanks so much for coming on. Explain what could happen if you would.

JOHN DANIEL DAVIDSON: Yes, right now Mexico doesn’t have a huge outbreak of the coronavirus. I think they have less than a hundred confirmed cases right now.

They barely exercise control over vast swathes of their own territory, and the healthcare system there is virtually non-existent in some places.

So an outbreak there is going to put communities in Texas, Arizona, New Mexico and California that border Mexico in great danger even if the coronavirus is introduced to those areas from the United States.

CARLSON: So if that happens, and if the Mexican economy collapses, I mean, some countries are going to see likely a severe recession or depression because of this and Mexico is one of them.

You could have a massive number of refugees, some infected coming over our southern border. The left has said — Democrats have said that’s totally fine, you know, everyone is welcome. Will they be able to continue saying that if that happens?

DAVIDSON: I don’t know. I mean, this changes the whole scenario. You know, this is sort of like the return of borders, right? All of a sudden we’ve rediscovered borders and that borders are important.

Controlling our borders is important, and the measures that are being taken right now by the Trump administration are appropriate. But it’s important to understand too that we’re looking at decades of neglect along our southwest border, where we don’t have operational control over vast swathes of the border, and the kinds of surges in asylum seekers and migrants that we saw last year, last spring coming from Central America, we could see the same thing only not coming from Central America, but coming from Mexico itself.

As you say, if the economy collapses there, if there’s an uncontrolled outbreak, we have very few options of how to control if that happens to our southwest border, and it’s something we need to start thinking about and taking seriously right now because Mexico is not up to the task, and they are not making any preparations.

They just had a huge music festival in Mexico City this past weekend. Hundreds of thousands of people and other events similar like that are happening all over the country. There’s no travel restrictions. There’s no precautions being taken on crowd, you know, limiting crowd sizes, nothing like that.

CARLSON: The President of Mexico is mocking those ideas. In the middle of a pandemic, it would be nice to have a border wall, if I can just say. John, great to see you tonight. Thank you.