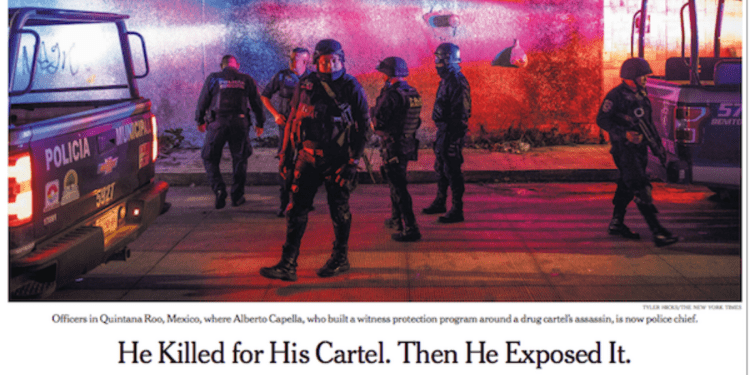 Sunday’s New York Times featured a front-page article about a Mexican gang assassin with a photo spanning five out of six columns: 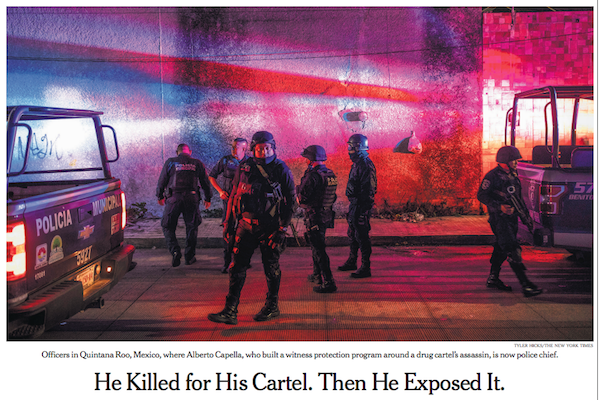 Curiously, the story immediately dived into the brutality of a gang training, including the teacher’s instantaneous murder of a student who refused to chop up a corpse.

Usually the Times like to celebrate diversity rather than explore its darker side. But perhaps in this case the editors liked the story of redemption of the assassin character, and that convinced them to overlook the nasty bits.

The uplifting aspect of the story might be heart-warming in a liberal sort of way, but Americans should remember that we live next door to some of the most savage characters on the planet while the border remains largely open.

He Was One of Mexico’s Deadliest Assassins. Then He Turned on His Cartel., New York Times, December 15, 2019

JOJUTLA, Mexico — The recruits filed into a clearing, where a group of trainers with the stern bearing of drill sergeants stood in a tight row, hiding something.

“How many of you have killed someone before?” one of the instructors asked. A few hands shot up.

The trainers separated, revealing a naked corpse face up in the grass. One thrust a machete into the nearest man’s hand.

“Dismember that body,” he ordered.

The recruit froze. The instructor waited, then walked up behind the terrified recruit and fired a bullet into his head, killing him. Next, he passed the blade to a lanky teenager while the others watched, dumbfounded.

The teenager didn’t hesitate. Offered the chance to prove that he could be an assassin — a sicario — he seized it, he said. A chance at money, power and what he craved most, respect. To be feared in a place where fear was currency.

“I wanted to be a psychopath, to kill without mercy and be the most feared sicario in the world,” he said, describing the scene.

Like the other recruits, he had been sent by a drug cartel known as Guerreros Unidos to a training camp in the mountains. He envisioned field exercises, morning runs, target practice. Now, standing over the body, he was just trying to suppress an urge to vomit.

He closed his eyes and struck blindly. To survive, he needed to stay the course. The training would do the rest, purging him of fear and empathy.

“They took away everything left in me that was human and made me a monster,” he said.

Within a few years, he became one of the deadliest assassins in the Mexican state of Morelos, an instrument of the cartels tearing the nation apart. By 2017, at only 22 years old, he had taken part in more than 100 murders, he said. The authorities have confirmed nearly two dozen of them in Morelos alone. (Continues)