Mexicans Turn to Sorcerers to Cope with Cartel Stress

To say Mexico is culturally backward is to understate a Grand Canyon of diversity that is nevertheless easy to overlook. The denizens of our southern neighbor may have TV sets and dress like cowboys, but underneath a somewhat familiar exterior lies a pre-Columbian outlook among many, particularly in the countryside. Superstition correlates with lower levels of education, so the local shaman may be popular psychology practitioner.

The New York Times, ever the promoter of extreme diversity, reported recently that it has become “fashionable” among Mexicans to turn to witchcraft for their anxiety about worsening cartel violence. (What’s wrong with using Mexico’s fine tequila as a mental health aid? — in moderation of course.)

Below, a Mexican woman receives a sorcery procedure involving an egg to relieve her fear of cartels. 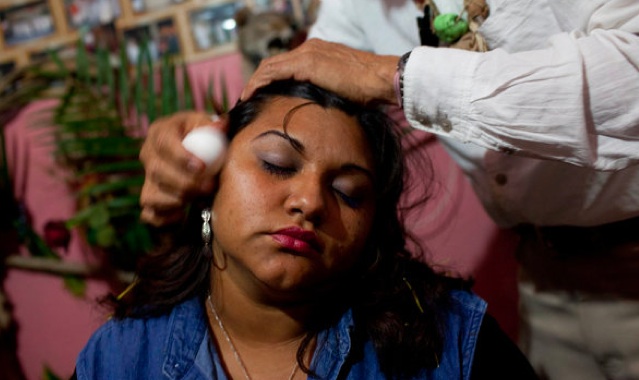 Another expression of Mexican diversity has been the near-worship of crime figure and narco saint Jesus Malverde. Actual criminals and wanna-bes leave votive candles at Malverde shrines, praying for the successful outcome of their drug-smuggling endeavors.

The popularity of Malverde shows the mixed feelings Mexicans have had about crime generally. There has been an admiration for successful criminals, expressed in narcocorridos and elsewhere. That cultural propensity has led to a permissive attitude about crime, which has come back to bite them.

And in some communities, like Culiacan, illegal drug smuggling brought prosperity to the local economy.

Anyway, this story is about celebrating diverse approaches to stress reduction.

CATEMACO, Mexico — In the dimly lighted back room of a modest house in this tourist city now largely devoid of tourists, Luis Tomás Marthen Torres, a warlock with 50 years of experience, closes his eyes and chants as he briskly rubs a stark white egg over the arms, chest and neck of a worried customer.

The ritual is old and common here in Mexico’s dominant hub for masters of the occult — where wizardry is passed from generation to generation — but like so many things in Mexico, the requests for help have changed.

Visitors to this middle-class town of around 67,000 people, which attributes its mysticism to the region’s ancient Olmec roots, had for decades sought wizards to cast love spells and cure physical ailments. But in the midst of the violence that has beset the state of Veracruz, new and creative forms of witchery for protection against extortion and for help finding kidnapped kin have become the leading demands from clients, local practitioners say.

Fear in Veracruz has intensified because the state is one of the newest battlefields for Mexico’s most powerful drug cartels. Jorge Chabat, an expert on security and drug trafficking at CIDE, a Mexico City research institution, said a cartel known as the Zetas and the Sinaloa cartel were squaring off in this coastal state, with the latter taking advantage of recent blows the federal government has dealt the former.

The growing drug trafficking presence here has brought with it a business that has boomed across the country in recent months: extortion. Even witches and warlocks are not being spared.

“They always say, ‘This is the leader of the Zetas speaking,’ ” Mr. Marthen Torres’s son and fellow warlock, John Joseph, said about the calls he receives from self-described organized crime members demanding money.

Some of Catemaco’s wizards have grown increasingly afraid, while others — perhaps seeking an edge in the contest for customers — claim to sense the vibes of the person on the other end of the line. When they feel a negative aura, they say, they simply do not pick up the phone. In fact, Mr. Marthen Torres said he was certain he would not become another casualty of this war because the date of his death had already been revealed to him. (It’s not for at least a decade, he said.)

Of course, less prescient people may not feel quite so equipped to confront this wave of violence.

“I’m constantly aware that my children could be picked up at any moment. It’s my biggest concern,” Julisa del Carmen said after being cleansed by a sorcerer. “You’re constantly hearing about kids being kidnapped.”

She visits both Mr. Marthen Torres and his son for a cleanse whenever she has crime-related panic attacks, she said.

Not surprisingly, the growing demand for protection has led to a new set of mystical services. For only $180, you can find a missing relative, said Alondra Martínez, 35, a witch who often makes the trip to a nearby hill to perform a ritual for the safe return of kidnapped women. She said she had received five requests just last month.

A desperate couple visited her recently, but she said she wouldn’t help the frightened parents until they had paid the full fee. “I told them they had eight days to find their daughter.”

Not only civilians are seeking help. Policemen and cartel thugs are also turning to Catemaco’s shamans for protection. Policemen are fearful of being killed in an ambush or risking harm to their families in a retaliatory act; drug traffickers worry about “being caught by the federal police or losing their territory,” explained a sorcerer in a nearby town who would go only by the name El Gato Negro, adding that he often performs animal sacrifices in a cave. Sometimes, shamans here say, the authorities and criminals cross paths in the witches’ waiting rooms, but neither side readily identifies the other.

Over all, though, business is down. Some hotel owners say occupancy has fallen as much as 80 percent in three years, which means fewer clients for wizards. Still, some new customers are turning out to be quite lucrative. One sorcerer, José Alberto Vera Cisneros, said a person claiming to be a drug trafficker imprisoned in Manzanillo, the city containing Mexico’s busiest port, had recently called and asked for a ritual to get him released. When he was let out shortly afterward, the occultist said, the man gave him a car.

While cartel figures may hand out expensive gifts, Mr. Marthen Torres is providing what he calls “social services” — free cleanses to those who have been extorted to the point of destitution.

To combat escalating crime, the state and federal governments have begun Operation Safe Veracruz. Federal forces have been deployed across the state, local and state police corruption is being cleaned up, and heavily armed checkpoints have been set up. More than 250 people have been detained since the plan was put in place early last month, but violence persists. On Oct. 20, eight bodies were dumped in the town of Paso de Ovejas, 100 miles northwest of Catemaco.

And as long as the crime continues, Catemaco’s shamans expect to remain in high demand for protective spells and clairvoyance by cops, robbers and victims alike. Mr. Marthen Torres said the bodies of bludgeoned victims were still warm when he arrived at crime scenes across the country to find out how the killings had taken place. “I can see the last image the victim saw on his eyes,” he said.

Some would surely find this hard to believe. “Crime isn’t resolved with magic,” President Felipe Calderón said during a speech in 2009 (though he almost certainly meant it in a figurative, not literal, way). Similarly, Ernesto Cordero, an aspiring candidate for the 2012 presidential election and a member of Mr. Calderón’s political party, recently pointed out that there were no magical remedies for “getting out of the problem we got ourselves in.”