Rick Perry is dumb as a box of rocks when it comes to borders and immigration enforcement. He is still apologizing for making insulting remarks about pro-sovereignty patriots in the September 22 debate when he said that anyone who doesn’t support in-state tuition for illegal aliens doesn’t have a heart.

The man didn’t learn anything from seeing his poll numbers crater to single digits after making that crude statement. His latest foot-in-mouth remark was support for work visas for illegal aliens — but no US citizenship for them. As if that mattered a frijole.

Illegal aliens come for the money only. A permit to work legally is the key to the kingdom for them. They don’t care about US citizenship; only La Raza and other political marxicans are concerned with herding hispanics to the polls.

And hasn’t Perry heard about American unemployment? There’s a jobs depression in the land, and transforming millions of illegal aliens into legal workers in a kick in the teeth for jobless citizens. 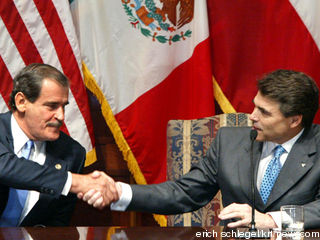 Texas Gov. Rick Perry proposed the federal government should extend work visas allowing illegal immigrants to move freely between the U.S. and their home countries — but stressed that he opposes amnesty or a path to citizenship.

Perry said in an interview with CNN’s John King on Thursday that expectations that U.S. authorities are going to arrest and deport up to 15 million illegal immigrants isn’t realistic. He added, however, that other Republicans, including fellow Texan George W. Bush, went too far when they previously proposed an immigration overhaul that included a path to citizenship.

The Texas governor also claimed his chief rival for the Republican presidential nomination, Mitt Romney, had once supported amnesty. Romney has drawn criticism for hiring a lawn care company that employed illegal immigrants at his family’s property in a Boston suburb for a decade — but has also said amnesty is not appropriate for illegal immigrants.

Perry didn’t elaborate on what such a visa plan would look like, saying only that authorities need to determine a better way to identify illegal immigrants and make them part of mainstream society. He also said the program would only work if the federal government first does a better job securing America’s borders.

“I disagree with the concept that somehow or another we’re going to pack up 10, to 12, to 15 million people and ship them back to the country of origin. That’s not going to happen,” Perry said. “So realty has to be part of our conversation. And then you need to have a strategy to deal with it. That is what I think we will have, but first you have to secure that border.”

Perry called Washington’s efforts to stop the flow of illegal immigrants “an abject failure” but said that, as president, he could accomplish the task in just a year using the existing fence, more border patrol agents and air surveillance. Perry also repeated his opposition to a fence running the length of the border, saying it would take 10 to 15 years to build.

“There’s places where a secure fence will work, and that strategic type fencing will work,” he said. “But the idea that people can easily just stand up and say 'let’s just build a fence’ and be done with it and wipe our hands, and its going to secure the border, that’s not reality.”

Perry has seen his polling numbers plummet after a string of lackluster debate performances — and angered some conservatives by defending a Texas plan that extends in-state university tuition to illegal immigrants who were brought into the country as children and attend high school in Texas.

The governor again defended the initiative on Thursday, saying better education helps ensure those participating in the program contribute to society: “We want taxpayers, not tax wasters.”