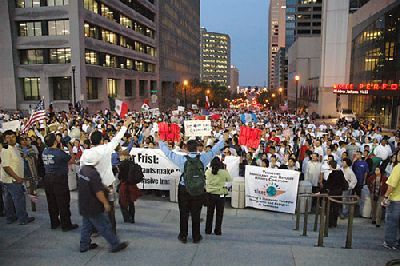 The legendary musician Charlie Daniels recently made a public statement on his website about immigration. The significance here: This is one of the staunchest supporters Bush has had in the entertainment industry. Daniels has backed many of Bush's more controversial decisions—and is now breaking ranks.

I don’t know how everybody else feels about it, but to me I think Hispanic people in this country, legally or illegally, made a huge public relations mistake with their recent demonstrations.

I don’t blame anybody in the world for wanting to come to the United States of America, as it is a truly wonderful place. But when the first thing you do when you set foot on American soil is illegal it is flat out wrong and I don’t care how many lala land left heads come out of the woodwork and start trying to give me sensitivity lessons.

I don’t need sensitivity lessons, in fact I don’t have anything against Mexicans, I just have something against criminals and anybody who comes into this country illegally is a criminal and if you don’t believe it try coming into America from a foreign country without a passport and see how far you get.

What disturbs me about the demonstrations is that it’s tantamount to saying, “I am going to come into your country even if it means breaking your laws and there’s nothing you can do about it.”

It’s an “in your face” action and speaking just for me I don’t like it one little bit and if there were a half dozen pairs of gonads in Washington bigger than English peas it wouldn’t be happening.

Where are you, you bunch of lilly livered, pantywaist, forked tongued, sorry excuses for defenders of The Constitution? Have you been drinking the water out of the Potomac again?

And even if you pass a bill on immigration it will probably be so pork laden and watered down that it won’t mean anything anyway. Besides, what good is another law going to do when you won’t enforce the ones on the books now?

And what ever happened to the polls guys? I thought you folks were the quintessential finger wetters. Well you sure ain’t paying any attention to the polls this time because somewhere around eighty percent of Americans want something done about this mess, and mess it is and getting bigger everyday.

This is no longer a problem, it is a dilemma and headed for being a tragedy. Do you honestly think that what happened in France with the Muslims can’t happen here when the businesses who hire these people finally run out of jobs and a few million disillusioned Hispanics take to the streets?

If you, Mr. President, Congressmen and Senators, knuckle under on this and refuse to do something meaningful it means that you care nothing for the kind of country your children and grandchildren will inherit.

But I guess that doesn’t matter as long as you get re-elected.

Pray for our troops.

What do you think?

Out Of My Face

One of the big problems in America today is that if you have the nerve to say anything derogatory about any group of people (except Christians) you are going to be screamed at by the media and called a racist, a bigot and anything else they can think of to call you.

Well I’ve been pounded by the media before and I’m still rockin’ and rollin’ and when it comes to speaking the truth I fear not. And the truth is that the gutless, gonadless, milksop politicians are just about to sell out the United States of America because they don’t have the intestinal fortitude to stand up to the face reality.

And reality is that we would never allow any other group of people to have 12 million illegals in this country and turn around and say, ”Oh it’s ok, ya'll can stay here if you’ll just allow us to slap your wrist.”

And I know that some of you who read this column are saying “Well what’s wrong with that?”

I’ll tell you what’s wrong with it. These people could be from Mars as far as we know. We don’t know who they are, where they are or what they’re up to and the way the Congress is going we’re not going to.

Does this make sense? Labor force you say? We already subsidize corporate agriculture as it is, must we subsidize their labor as well?

If these people were from Haiti would we be so fast to turn a blind eye to them or if they were from Somalia or Afghanistan? I think not.

All the media shows us are pictures of hard working Hispanics who have crossed the border just to try to better their life. They don’t show you pictures of the Feds rounding up members of MS 13, the violent gang who came across the same way the decent folks did. They don’t tell you about the living conditions of the Mexican illegals some fat cat hired to pick his crop.

I want to make two predictions. No. 1: This situation is going to grow and fester until it erupts in violence on our streets while the wimps in Washington drag their toes in the dirt and try to figure how many tons of political hay they can make to the acre.

No 2: Somebody is going to cross that border with some kind of weapon of mass destruction and set it off in a major American city after which there will be a backlash such as this country has never experienced and the Capitol building in Washington will probably tilt as Congressmen and Senators rush to the other side of the issue.

I don’t know about you but I would love to see just one major politician stand up and say, “I don’t care who I make mad and I don’t care how many votes I lose, this is a desperate situation and I’m going to lead the fight to get it straightened out.”

I don’t blame anybody for wanting to come to America, but if you don’t respect our immigration laws why should you respect any others.

And by the way, this is America and our flag has stars and stripes. Please get that other one out of my face.

Pray for our troops

What do you think?

Charlie, I for one welcome you to the ranks of Americans that have spoken out on the topic of immigration—many of whom, I might add, don't necessarily have the kind of secure position you have. These statements are a really good start. There is a lot of work to do before this problem is solved.