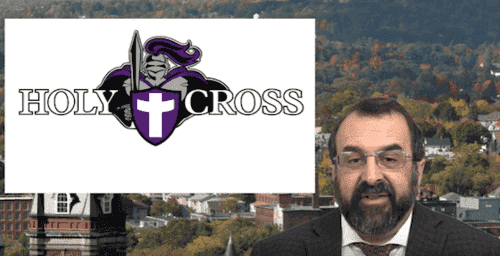 Kudos to Robert Spencer for supplying a briefo history of the Crusades that obliterates the whole idiot idea that Islamophobia springs somehow from meanie Christians invading the Middle East in the Middle Ages. Jihadists would have us believe that the Crusades were an unwarranted attack upon peaceful muslims when that is not an accurate history at all.

Robert Spencer reports that Holy Cross’ Crusader mascot is being axed because of political correctness regarding Islam. 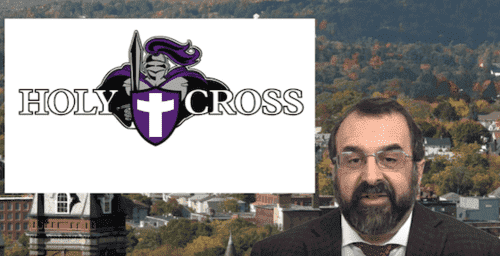 Islam was spread by the sword across the region to North Africa and beyond following its founding. So Westerners have no reason to feel guilty in any way about the Crusades or beholden to muslims who want to manipulate us about immigration or in other ways.

(For a little more detail on this subject, see The Real History of the Crusades by Professor Thomas Madden.)

As the founder of JihadWatch.org and author of many well referenced (and readable!) books about Islam, Robert Spencer is an excellent explainer of all things muslim.

Spencer’s recent video was a reading of an article published online in March:

The College of the Holy Cross in Worcester, Massachusetts, is dropping its Crusader mascot. The College Fix reports that the Catholic college “has decided to stop using ‘knight imagery’ to represent its ‘Crusaders’ nickname amid concerns that it evokes ‘the violence of the Crusades’ and promotes ‘Islamophobia.’”

The Holy Cross Board of Trustees declared that the Crusades were “among the darkest periods in Church history,” but the college is going to continue using the Crusader name while dropping the knight mascot. The Board exhorted students to instead see themselves as Crusaders for Leftist buzzwords: “Crusaders for human rights, social justice, and care for the environment; for respect for different perspectives, cultures, traditions, and identities; and for service in the world, especially to the underserved and vulnerable.”

Holy Cross President Fr. Philip Boroughs explained: “[T]he visual depiction of a knight, in conjunction with the moniker Crusader, inevitably ties us directly to the reality of the religious wars and the violence of the Crusades.”

The lesson is clear at Holy Cross: the Crusades are something to be ashamed of, and the school’s Catholic students should not take pride in knowing that the Crusades are part of their Church’s history.

Yet as I show in my forthcoming book The History of Jihad From Muhammad to ISIS, the Crusades were not, as Holy Cross administrators and students evidently assume, an unprovoked exercise of proto-colonialism directed against a peaceful Muslim world.

The Crusades were in reality a late, small-scale defensive response after 450 years of jihad attacks had conquered and Islamicized what had previously been over half of the Christian world.

Armies animated by the jihad ideology (or that eventually justified their actions by recourse to it) had occupied much of the Middle East, North Africa, and Spain — as well as Persia and much of India — centuries before a Crusade was even contemplated. They had entered France and besieged Constantinople, the capital of the Christian Eastern Roman (Byzantine) Empire, several times.

The Seljuk Turks’ victory over the Byzantines at Manzikert in 1071, when they took the Emperor Romanus IV Diogenes prisoner, opened all of Asia Minor to them. In 1076, they conquered Syria; in 1077, Jerusalem. The Seljuk Emir Atsiz bin Uwaq promised not to harm the inhabitants of Jerusalem, but once his men had entered the city, they murdered 3,000 people.

That same year, the Seljuks established the sultanate of Rum (Rome, referring to the New Rome, Constantinople) in Nicaea, perilously close to Constantinople itself; from there they continued to threaten the Byzantines and harass the Christians all over their new domains. The Byzantine Empire, which before Islam’s wars of conquest had ruled over a vast expanse including southern Italy, North Africa, the Middle East, and Arabia, was reduced to little more than Greece. It looked as if its demise at the hands of the Seljuks was imminent.

The Church of Constantinople considered the Pope a schismatic and had squabbled with him for centuries, but the new Byzantine Emperor Alexius I Comnenus swallowed his pride and appealed for help.

And that is how the First Crusade came about: it was a response to the Byzantine Emperor’s call for help against Muslim invaders who threatened to destroy the Christian empire.

It is undeniable that the Crusaders committed many atrocities. So did their jihadi opponents. But in the main, the Crusader endeavor was not an exercise in imperialism or proto-colonialism, but an attempt to protect Christians from jihad attacks.

So why shouldn’t Holy Cross College have a Crusader mascot and take pride in its own culture and heritage? Because that culture is spent, and weak, and confused, and anxious to appease a much more confident alternative culture that regards the Crusades as an affront.

The West continues its cultural self-abnegation in the face of the chimera of “Islamophobia” — a propaganda neologism designed to make people ashamed of defending themselves and their homeland against a newly aggressive Islamic jihad.

Holy Cross, of course, is not alone. The rush to disavow any connection to Crusaders is part of a larger tendency to remain in denial about the jihad aggression that threatens so many in the world today. It manifests an acceptance of the Islamic view of history — which has been aggressively thrust upon the West in recent decades — that blames the origin of conflict between Muslims and Christians upon the evil Crusaders despite the timeline which proves this false.

At a time when the Crusaders’ ancient jihadi foes are newly invigorated and more aggressive than they have been for centuries, this cultural self-hatred is a recipe for disaster.