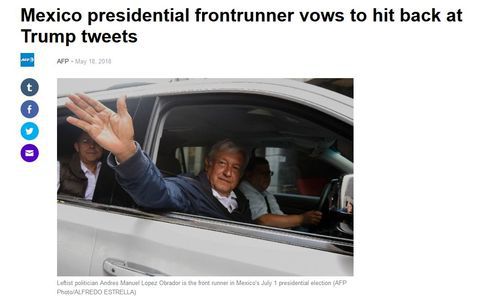 Mexico is in the midst of a presidential election, with Election Day scheduled for July 1st, a scant six weeks away.

The front-runner and likely winner Andres Manuel Lopez Obrador (known by his initials as AMLO) has just threatened Trump–with tweetstorms. Oh, the horror!

The fiery leftist leading the race for Mexican president, Andres Manuel Lopez Obrador, vowed Friday [May 18] to hit back at US President Donald Trump if he insults Mexico on Twitter. "If he makes an offensive tweet, I'm going to take responsibility for answering him," said Lopez Obrador, a former Mexico City mayor who has a double-digit lead in most opinion polls heading into the July 1 election.

Mexico presidential frontrunner vows to hit back at Trump tweets

"I think (Trump) is going to understand he has to get himself under control, that he can't go around offending the Mexican people. We don't want confrontations with him, but we are going to ask him to respect us," he said at a campaign rally in the town of Huajuapan, in the southern state of Oaxaca.

Trump has regularly attacked Mexico on Twitter since launching his presidential campaign in 2015 by referring to Mexican immigrants as criminals and rapists, and vowing to build a wall on the border.

They’re still whining about Trump’s campaign kickoff speech. Well, there are criminals among the Mexican immigrant population. As for “vowing to build a wall”, how is that a threat to Mexico?

Mexico's current President Enrique Pena Nieto has rarely answered his counterpart's Twitter outbursts, and his foreign ministry regularly insists Mexico will not discuss diplomatic matters on social media. Lopez Obrador promised a change in strategy if he wins the election. The candidate, who is making his third bid at the presidency, is only an occasional tweeter — though he has increased his use of social media during his campaign.

A common opposition party complaint in Mexico is that the current president (of any party) is not doing enough to stand up to the gringos. So AMLO is saying he is going to fight back against Trump–by tweeting.

In April he [AMLO] tweeted to the US president that he wanted to sell him Mexico's presidential plane, a plush Boeing Dreamliner purchased by the previous government of which he is fond of saying, "Not even Trump has a plane like that!"

So what are we to make of all this? It is rather entertaining.

And if the U.S. has leadership that is protecting our sovereignty, it doesn’t matter a hill of beans who the president of Mexico is, or how much he tweets.

Below, some top comments from the Yahoo News version of the story: 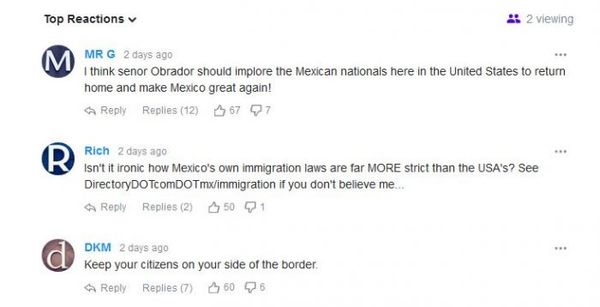