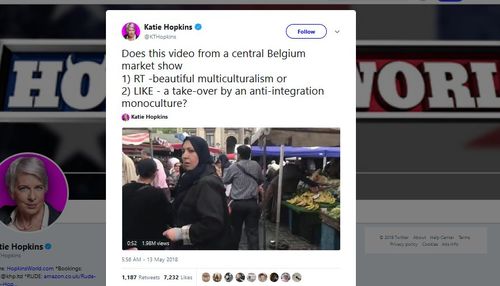 British journalist Katie Hopkins is currently working for The Rebel, Ezra Levant’s media company. She continues to upset the diversity-inclined with her honest, first-person reports. She recently went undercover by unhappily donning a burqa to visit the Brussels neighborhood of Molenbeek.

What she saw was not pretty: Molenbeek is another non-assimilating cancer of hostile Islam brought to Europe by unwise immigration.

Does this video from a central Belgium market show
1) RT -beautiful multiculturalism or
2) LIKE – a take-over by an anti-integration monoculture? pic.twitter.com/AQOH50qSdQ

In 2012, Dale Hurd reported, “Brussels is the capital of Europe. But some are now calling it the Muslim capital of Europe” where Sharia4Belgium has set up shop to work for Islamic law to rule the nation.

Molenbeek made unwanted headlines following the November 13, 2015 Paris attacks that killed 130 people around the city because the jihad was plotted in a Brussels bar and some of the terrorists were arrested in the neighborhood.

Plus, Molenbeek’s jihadism is not new. As the Washington Post noted in 2016, Molenbeek was “home to one of the attackers in the 2004 commuter train bombings in Madrid and to the Frenchman who shot four people at the Jewish Museum in Brussels in August 2014. The Moroccan shooter on the Brussels-Paris Thalys train in August 2015 stayed with his sister there.”

So the place has a well earned reputation as an Islamic hell hole. But when Katie Hopkins pointed out the obvious to the top city official, Mayor Françoise Schepmans was incensed at the negative portrayal and has brought a lawsuit against Hopkins to repair her city’s lost reputation, though it’s a little late for that. The mayor would be smarter to just hunker down and shut up while it blows over.

The mayor of Molenbeek is seeking to file a civil suit against British journalist Katie Hopkins for depicting the Brussels neighborhood “the European capital of jihadism.”

“What this journalist did is inexcusable,” Molenbeek Mayor François Schepmans told Belgian outlet La Dernière Heure on Thursday. “In her comments, she’s shown a real desire to break Molenbeek.”

Katie Hopkins earlier this week stopped Schepmans in the street and grilled her on local authorities’ apparent failure to detain Salah Abdeslam — one of the perpetrators of the 2015 Paris attacks that killed 130 people — despite the fact he was known to police.

Katie Hopkins’ discussion with Tucker Carlson about the state of jihad in Belgium was found to be objectionable by the Molenbeek mayor: