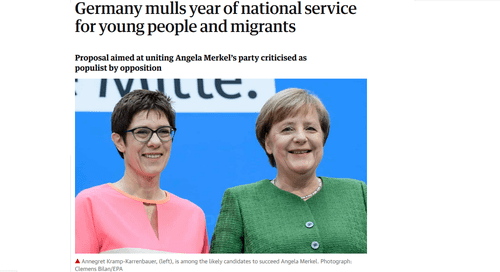 [See Also: "Like the Roman"... GOP Congress Prepares to Replace American Veterans With Illegal Aliens in the Military by James Kirkpatrick]

One of the perversions of a multicultural society is that many of the institutions and policies that serve positive roles in a homogenous nation-state become extremely destructive once the nation-state has been deconstructed. Universal health care may or may not be a good idea for a homogenous nation-state, but it is assuredly disasterous when a country is suffering from mass immigration. Massive public works are the same way, as they are transformed from collective accomplishments of the nation into giveaways for various multicultural groups that often can't do the job. Finally, the same applies to national service plans or military conscription. What is created is not an army of citizens, but an army which can be directed against citizens, often filled with people who have no actual connection to the country and indeed pose a threat to it.

Germany is planning to fill its defense forces with "migrants," which suggests that the real purpose of the army is not to defend the Fatherland, but to suppress it.

Annegret Kramp-Karrenbauer,the CDU general secretary, suggested earlier this month that all young men and women should complete a compulsory “service year”. The plan, if implemented, would also apply to all adult asylum seekers and refugees, she added.

The programme would see some young people join the military or the fire service, or help with disaster relief. The CDU hopes others would choose to volunteer as care workers, thereby helping address chronic staff shortages in care homes and hospices.

The proposal came after Kramp-Karrenbauer – among the favourites to succeed Merkel as the head of the party – conducted a “listening tour” of the CDU grassroots, gathering ideas for a new manifesto to be presented at the forthcoming party conference in December.“Many CDU members mentioned reintroducing the draft or general compulsory service,” Kramp-Karrenbauer told the Funke Mediengruppe news group on Saturday, adding that she still remained undecided. She also explained the suggestions she had heard often mentioned including migrants, something she thought “worth considering”.

“If refugees complete such a year, which could be voluntary or mandatory, it would help to integrate them into the country and society,” Kramp-Karrenbauer said. “It would also increase the acceptance of refugees among the population.”

Her comments were immediately dismissed as “populist” by the Social Democrats and the proposal has so far found no support from the Greens, the leftwing Die Linke, or the liberal Free Democratic party (FDP). Only the far-right Alternative für Deutschland (AfD) supports reintroducing military service.

Naturally, the Left is opposed to this. It's interesting that "populist" has become a kind of slur, showing that the Left has become the real establishment, constantly mobilizing against the threat of unapproved actions by the populace. Still, authentic conservatives and nationalists need to have mixed feelings about this.

A German army composed of "migrants" won't be a boon to national defense but a national security threat in and of itself. It represents a regression to what they used to say about Prussia; not a country with an army, but an army with a country. In fact, it's even worse, as at least Prussia was a bulwark of Western Civilization, not a threat to it. The same can't be said of modern Germany if demographic trends continue.