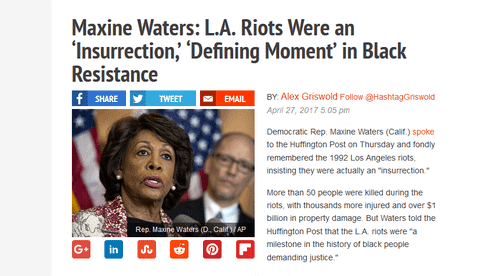 I was looking at my depth chart of the US House of Reps, and noticed that, if/when the Dems take control of Congress, the new Chairman of the Committee on Financial Affairs will be: Maxine Waters. Isn’t that something a serious, or even minimally competent, political party would make sure voters know about? It’s not as though the Dems or media consider it unsportsmanlike to mention Steve King or Louie Gohmert at every opportunity.

As I read the polls, Trump may be unpopular nationally (at least with registered, as opposed to likely,* voters), but he’s a whole lot more popular than the Republican Congress. If they have any chance at all of holding the House, I think the Republicans will have to NATIONALIZE this election, and make it a choice between Trumpism (amending trade deals, border security, light regulation, good economy) on the one hand, and impeachment/abolishing ICE/lying press on the other; if the Dem leadership tries to poo-poo the idea of impeachment or abolishing ICE, they will have to answer to their base, and that discussion is only good for the GOP.

If I were advising them, I would absolutely send Trump into swing districts to fire up the base, because they can’t win without an unusually high turnout like 2002. The soccer Moms aren’t going to hate Trump any more than they do already just because he comes to town, and if Trump manages to stay on his best behavior (see his event introducing Kavanaugh), when the soccer Moms are watching, he could convince many of them that he’s not so bad. Yes, any public appearance by Trump is an opportunity for the MSM to distort whatever he says, but in my experience, it’s harder for the media to cheat with local coverage, because enough of the people who matter are in a position to know they’re lying. In other words, the GOP should run their offense like they did in 1994, and their defense like they did in 2002, and the Dems did in 1998.

I respectfully ask that you agree with me, and tell me that I am 100% correct.

*Likely voters are identified by their (knowable) voting history, not by how determined to vote they tell pollsters they are. Polling registered voters is usually a waste of time, but pollsters like it because it’s cheaper (no investigations of an individual’s actual voting history), and because it always overstates Dem prospects.