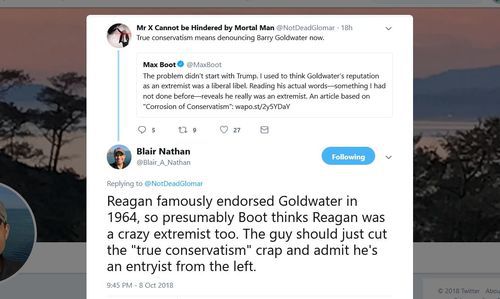 Max Boot Vs. Goldwater...And All Other Real Conservatives

The problem didn't start with Trump. I used to think Goldwater’s reputation as an extremist was a liberal libel. Reading his actual words—something I had not done before—reveals he really was an extremist. An article based on "Corrosion of Conservatism": https://t.co/qIvBAPVhna

Reagan famously endorsed Goldwater in 1964, so presumably Boot thinks Reagan was a crazy extremist too. The guy should just cut the "true conservatism" crap and admit he's an entryist from the left.

I saw this thread on Twitter about Max Boot's denunciation of Goldwater, in which Boot writes

The problem didn't start with Trump. I used to think Goldwater’s reputation as an extremist was a liberal libel. Reading his actual words—something I had not done before—reveals he really was an extremist.

Fascinating to think that "conservative" Boot had spent years referencing someone he's never read, or apparently even looked up on Wikipedia:

The thing is that Goldwater's most famous quote, from his 1964 acceptance  speech from his Presidential run in 1964, is

Anyone who joins us in all sincerity, we welcome. Those who do not care for our cause, we don't expect to enter our ranks in any case. And let our Republicanism, so focused and so dedicated, not be made fuzzy and futile by unthinking and stupid labels.

I would remind you that extremism in the defense of liberty is no vice. And let me remind you also that moderation in the pursuit of justice is no virtue.

While most people have connected that speech with Goldwater's stated willingness to use force to resist the agressions of Boot's native Soviet Union, what Boot means by it is Goldwater's moderate, principled resistance to the Federal civil rights juggernaut:

Conservatives were furious that Eisenhower made no attempt to liberate the “captive nations” of Eastern Europe or repeal the New Deal, and that he did not support Joseph McCarthy’s Red Scare. Worst of all, from the viewpoint of contemporary conservatives, Eisenhower was a moderate on racial issues. He appointed Chief Justice Earl Warren, who presided over the Supreme Court’s school desegregation decision, Brown v. Board of Education, and then sent troops to Little Rock to enforce desegregation.

Most Republicans in Congress voted in 1964 and 1965 for landmark civil rights legislation, but not Goldwater. In his 1960 bestseller “The Conscience of a Conservative,” Goldwater wrote that “the federal Constitution does not require the states to maintain racially mixed schools.” Goldwater was not personally a racist—he had integrated the Arizona Air National Guard—but, like his GOP successors, he was happy to make common cause with racists in order to wrest the South from the Democrats.

Of course, neoconservative warmonger Boot, author of The Savage Wars of Peace, War Made New, Invisible Armies, and to some extent, the Iraq war, is calling out Goldwater's defense of freedom, and resistance to what George Bush called "tyranny in our world":

Goldwater was just as extreme when it came to foreign affairs. He suggested that Americans needed to overcome their “craven fear of death.” If the Soviets intervened to crush another uprising in Eastern Europe, like the one in Hungary in 1956, he wanted “to move a highly mobile task force equipped with appropriate nuclear weapons to the scene of the revolt.” I used to think Goldwater’s reputation as an extremist was a liberal libel. Reading his actual words—something I had not done before—reveals that he really was an extremist.

This would have been a good time for Boot [Email him] to say, as he has on other occasons, that he was an emigre from Communist Russia in 1976.[I came to this country 41 years ago. Now I feel like I don't belong here, Washington Post, September 5, 2017] He might also have said whether or not anyone in his family was involved in Soviet war crimes against Hungary,or elsewhere, and why it's not okay to end "tyranny in our world" if it involves bombing Russians, rather than Arabs.

We might also ask, why,if he was ever an American movement  conservative, or a Russian "refugee" from Communism, he failed to learn that the "Red Scare" wasn't a "Scare", but a real, serious threat? I mean, Boot is the the guy who actually said he'd vote for Stalin rather than Trump.

Here's a list of VDARE.com's Boot coverage in the Trump Era, during which he has gone completely crazy: