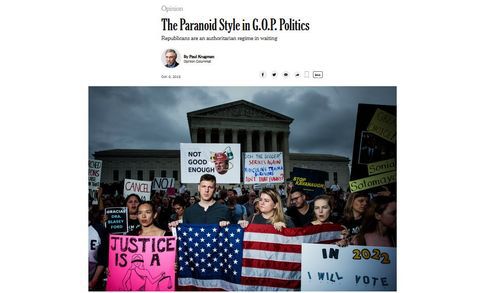 Krugman: "Republicans Are an Authoritarian Regime in Waiting"

The Paranoid Style in G.O.P. Politics
Republicans are an authoritarian regime in waiting

I like quite a few things about Krugman. For example, he’s not artful or devious. He just blurts out what’s on his mind. Add in his lack of self-awareness and he’s not exactly disarming.

Of course, he winds up projecting like crazy, and this column is a funny example.

But I want to comment seriously on this bit:

Does anyone doubt that Trump would like to go full authoritarian, given the chance?

I think Trump would be bored about the second hour of a “full authoritarian” regime and let his critics out of the soccer stadiums to give him back somebody to clash with. In fact, I don’t think there is anybody in American public life who loves the conflict of democratic politics more than Trump. Maybe Pat Buchanan, who doesn’t take conflict as personally and is more able to put himself in the other man’s shoes than Trump is, but that’s about it.

Authoritarianism in the European sense that brought to power both Hitler (bad) and De Gaulle (not bad) was connected to the feeling that partisan debate was unseemly. Trump, on the other hand, loves conflict. His enemies typically hate him because they find his love of conflict unseemly. They long for a philosopher-king like Obama under whom they can serve as PR flacks.

Admittedly, I see Trump as the second coming of his role model George Steinbrenner, so I view Trump through the lens of the 1977-1981 World Series rivalry of Steinbrenner’s New York Yankees and the O’Malley family’s Los Angeles Dodgers.

The O’Malleys ran a super-authoritarian corporation where everybody, even a Steinbrenner / Trumpish personality like Tommy Lasorda, followed the corporate PR line that everything was copacetic. The L.A. Dodgers were extremely opaque and had largely co-opted the media into going along with their strategy.

In contrast, the early Steinbrenner Yankees were the most public controversy-friendly baseball team of all time, with Steinbrenner, Billy Martin, Reggie Jackson, and Thurman Munson engaged in a war of all against all carried out on the back covers of the tabloids.

By the way, I haven’t noticed much evidence that Trump is anywhere near as outraged by Krugman as Krugman is by Trump. Perhaps it’s just because Krugman is more of a print pundit and isn’t on TV all that much. But Trump pays a lot of attention to the New York Times. Perhaps Trump senses a fellow New Yawker in the culturally unsophisticated Krugman.