Matt Yglesias: "Nobody Knows This But The Republican Party Platform Supports Statehood For Puerto Rico"—We Know! 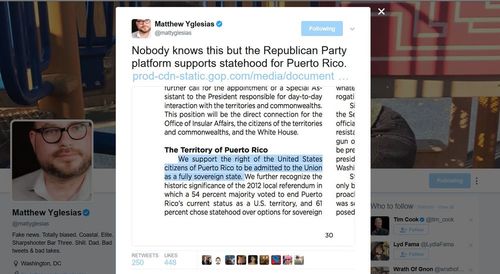 The number of things Matt Yglesias is surprised to find out is amazing. I remember when he announced on Twitter his discovery that English novelist Evelyn Waugh was a man (Not intuitively obvious, I admit.) Also when he seemed unaware in 2014 that Gerald Ford had died six years earlier.

Perhaps no living writer more fully embraces unabashed ignorance than Yglesias. I couldn’t begin to adequately catalogue the examples but interested readers might enjoy “Does Matthew Yglesias Ever Tire Of Being Embarrassingly Wrong About Everything?” and “Taming The Fury Of Rage: How Not To Write, Starring Slate’s Matt Yglesias.”

Everyone has their favorite example of Matt Yglesias not knowing what the heck he’s talking about. I have many, including his confusion over why the Vatican has a separate embassy from Italy and the day he found out about the Everglades.

There's another paragraph of links to what Matt Yglesias doesn't know, but back to Puerto Rico—here at VDARE.com we know about the Republican Party Platform supporting statehood because we have writers who have studied and thought about it. It isn't a secret.

Of course, [statehood] would be suicidal for the GOP. That’s why the Stupid Party has been pro-Puerto Rican statehood since the 1940s. The 2016 Republican platform (p. 30) states that

We support the right of the United States citizens of Puerto Rico to be admitted to the Union as a fully sovereign state. We further recognize the historic significance of the 2012 local referendum in which a 54 percent majority voted to end Puerto Rico’s current status as a U.S. territory, and 61 percent chose statehood over options for sovereign nationhood. We support the federally sponsored political status referendum authorized and funded by an Act of Congress in 2014 to ascertain the aspirations of the people of Puerto Rico. Once the 2012 local vote for statehood is ratified, Congress should approve an enabling act with terms for Puerto Rico’s future admission as the 51st state of the Union.

Well, there's that whole "ostensibly" thing (platforms don't reflect what the Party wants, but what the Platform Committee wants) but no, it shouldn't. And it won't, God willing.

“In America, we have a two-party system,” a Republican congressional staffer is supposed to have told a visiting group of Russian legislators some years ago.

He added: “Periodically, the two parties get together and do something that is both stupid and evil. This is called—“bipartisanship.”

However, this bipartisan support for stupid and evil ideas from the people at the top of the party  is always under pressure from the actual voters, which is why in spite of all George W. Bush, and later the Gang Of Eight could do, amnesty never passed.

And finally, Puerto Rican statehood support isn't really going to be "bipartisan" in the Senate, because it would add two Democratic Senators to the chamber.