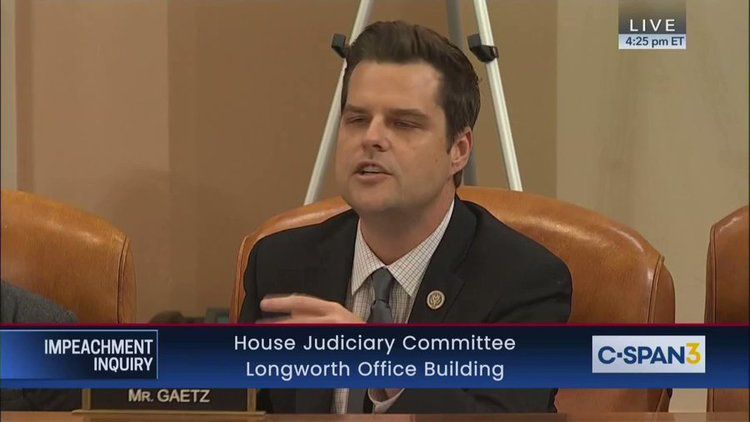 Goldman claimed he was “not a partisan.” Gaetz incinerated that claim Monday. [Gaetz questions Democratic counsel about political donations, by Maggie Miller, The Hill, December 8, 2019]

The Florida Republican first proved that Goldman donated tens of thousands of dollars to Democratic candidates. Gaetz asked Goldman if his donations put him in the position to ask questions at the impeachment hearings. The Democratic counsel remained silent.

Gaetz then showed a tweet from Goldman libeling the president.

What lying? Nothing in the dossier has proved to be false (including your pee tape). But we can agree that we all look forward to the facts coming out. Everything that has come out so far has shown you to be an out and out liar (eg Cohen tape, purpose of June 9 meeting, etc). https://t.co/or1ZQbCmy0

The look on Goldman’s face is priceless as he sees his outrageous tweet shown to the entire country.

He tried to change the topic and highlight his involvement in “nonpartisan investigations.” Gaetz just wanted to know if Goldman regretted the tweet, which the lawyer refused to do.

Gaetz’s effective grilling demonstrates how the impeachment proceedings are a sham run by the worst Democratic hacks. No conservative should take the effort seriously.

Gaetz also wants America to reconsider its relationship with Saudi Arabia following the deadly Pensacola shooting. A Saudi national on a student visa murdered three American servicemembers at a naval base last week. Gaetz believes we need to get tougher on the Saudis, a wise move opposed by the Swamp.

It’s time that America rethink its sordid relationship with the Saudis and put our national interests first.

Gaetz is one of the few Republicans eager to make that change.