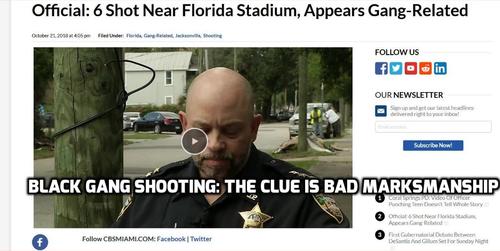 This story of a lot of people getting shot in Jacksonville is not what we usually call a mass shooting event. It's more of a "drive-by" shooting, something that may be making a comeback:

Authorities say six people have been wounded, some seriously, in an apparent gang-related shooting blocks from the NFL stadium in Jacksonville where the Jaguars were hosting the Houston Texans.

Ron Lendvay, director of investigations for the Jacksonville Sheriff’s Office, says the shooting erupted near a laundromat at 12:35 p.m. Sunday and five men and one woman ranging in age from their 20s to the 70s were rushed for medical care.

He told a news briefing Sunday the shooter fired from the passenger side of a gray sedan driven by someone else in the general area of the stadium.

He gave no indication of any link to the game, which started at 1 p.m. and wasn’t affected.

Lendvay says any fans who parked near the shooting scene would be able to retrieve their cars afterward.[More] 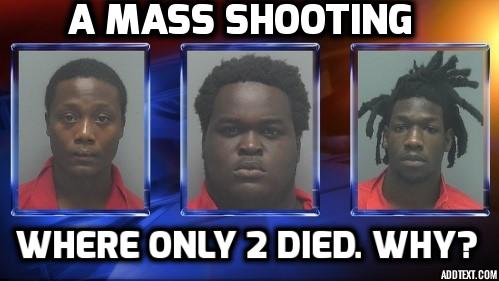 In September of last year,  I did an article called The “Leaded Law” And Mass Shootings—Poor Black Marksmanship Is Saving Lives about the “Leaded Law” proposed by the Ben Kurtz blog: “So here’s a handy rule of thumb when you hear about the next mass shooting and find the press being coy about who did it and why: If the shooters exhibit bad aim (substantially worse than 1 killed for every 3 wounded) then they are black gangsters settling a score.”

In my article, I suggested several reasons based on both nature and nurture why blacks as a group aren't very good shots, but whatever the reason, if you hear that six people were shot but no one died, or as in the Club Blu shooters at the right, 20 people were shot but only two died, that's usually a black-on-black shooting.