Maladjustment and Misery in Mendota, Mexifornia

California's central valley is a worsening Mexican Appalachia of poverty and dysfunction, an imported social and economic disaster resulting from immigration anarchy. Farm town Mendota is 95 percent Hispanic and has the highest unemployment rate in the state, over 38 percent.

(Even so, the amnesty hawks keeps hammering away at American borders and sovereignty. When the economy is good, the open-borders extremists say America requires a firehose stream of foreign workers. Now that the economy is in the tank, distasteful spokesholes like Tamar Jacoby say we need increased "flow" for an unspecified future time where there might be a labor shortage.)

The fact that the unemployment rate in Mendota, 38.5 percent, is the highest in California doesn't even raise an eyebrow here. The anguish, frustration and hunger are visible in every corner and on every face of this town of 7,800 people 35 miles west of Fresno - and nobody sees any relief in sight.

"I try hard not to be depressed, but the little money we do get we can't stretch enough," Oregel, 38, said in Spanish as she sat in a weekly meeting at a community center, where mothers gather to share survival tips. "It's never been this bad in my life. I even have a friend who called his family in Mexico to ask for help, which never happens. We are always the ones sending our money home, not the other way around."

In the worst national economic crisis since the Great Depression, there are few better illustrations of the resultant human suffering than Mendota, where 95 percent of the population is Latino and 42 percent of residents live below poverty level. Even in a good year, seasonal unemployment ranges above 20 percent because of the transient nature of farm work, but the past year or so has brought a convergence of blows that have made suffering a year-round reality. [Mendota: a town scraping bottom, San Francisco Chronicle, July 26, 2009]

Downtown Mendota does not look much like America, at least in this photo. 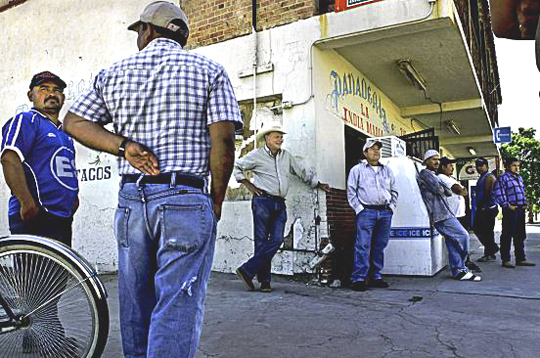