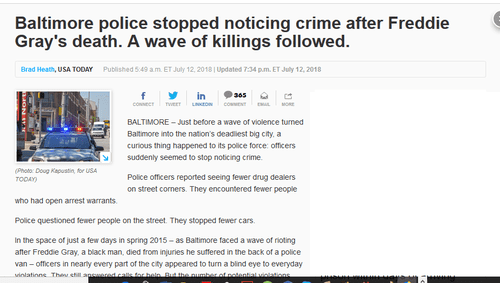 BALTIMORE – Just before a wave of violence turned Baltimore into the nation’s deadliest big city, a curious thing happened to its police force: officers suddenly seemed to stop noticing crime.

In the space of just a few days in spring 2015 – as Baltimore faced a wave of rioting after Freddie Gray, a black man, died from injuries he suffered in the back of a police van – officers in nearly every part of the city appeared to turn a blind eye to everyday violations. They still answered calls for help. But the number of potential violations they reported seeing themselves dropped by nearly half. It has largely stayed that way ever since.

The surge of shootings and killings that followed has left Baltimore easily the deadliest large city in the United States. Its murder rate reached an all-time high last year; 342 people were killed. The number of shootings in some neighborhoods has more than tripled. One man was shot to death steps from a police station. Another was killed driving in a funeral procession.

“In all candor, officers are not as aggressive as they once were, pre-2015. It’s just that fact.”

What’s happening in Baltimore offers a view of the possible costs of a remarkable national reckoning over how police officers have treated minorities.

Starting in 2014, a series of racially charged encounters in Ferguson, Missouri; Chicago; Baltimore; and elsewhere cast an unflattering spotlight on aggressive police tactics toward black people. Since then, cities have been under pressure to crack down on abuses by law enforcement.

So has the U.S. Justice Department. During the Obama administration, the department launched wide-ranging civil rights investigations of troubled police forces, then took them to court to compel reforms. Under President Donald Trump, Washington has largely given up that effort. “If you want crime to go up, let the ACLU run the police department,” Attorney General Jeff Sessions said at a gathering of police officials in May.

Whether that scrutiny would cause policing to suffer – or crime to rise – has largely remained an open question.

In Baltimore, at least, the effect on the city’s police force was swift and substantial.

Police typically learn about crime in one of two ways: either someone calls for help, or an officer sees a crime himself and stops to do something. The second category, known among police as an “on-view,” offers a sense of how aggressively officers are doing their job. Car stops are a good example: Few people call 911 to report someone speeding – instead, officers see it and choose to pull someone over. Or choose not to.

Millions of police records show officers in Baltimore respond to calls as quickly as ever. But they now begin far fewer encounters themselves. From 2014 to 2017, dispatch records show the number of suspected narcotics offenses police reported themselves dropped 30 percent; the number of people they reported seeing with outstanding warrants dropped by half. The number of field interviews – instances in which the police approach someone for questioning – dropped 70 percent.

“Immediately upon the riot, policing changed in Baltimore, and it changed very dramatically,” says Donald Norris, an emeritus professor at the University of Maryland Baltimore County, who reviewed USA TODAY’s analysis. “The outcome of that change in policing has been a lot more crime in Baltimore, especially murders, and people are getting away with those murders.”

Police officials acknowledge the change. “In all candor, officers are not as aggressive as they once were, pre-2015. It’s just that fact,” says acting Police Commissioner Gary Tuggle, who took command of Baltimore’s police force in May.

The much-denied Ferguson Effect is actually one of the more strikingly obvious phenomenon in the history of social sciences.

With the cops neutralized, the media has recently turned to hunting down white people who call the cops.