In California, the end of summer has brought an increased danger of wildfires, and two witless Mexicans who actually started a fire so they could be rescued got a bigger signal than they wanted. Unfortunately, the arsonists didn’t hang around to be arrested, er saved.

A fire that had burned more than 800 acres by Friday night was caused by two stranded illegal immigrants who set a signal fire for help, Cal Fire officials said.

Dubbed the Cowboy Fire, the blaze began about 1:15 p.m. Thursday near the Pacific Crest Trail southwest of Lake Morena. It burned in an area between Campo and Potrero.

The two illegal immigrants called C4, Mexico’s emergency distress system, on Thursday and said they had been lost for two days and were dehydrated, said Cal Fire spokeswoman Roxanne Provaznik. They said they were going to light a signal fire to be rescued.

There was evidence in the area where the fire started, including empty food cans, that people had been there, Cal Fire Battalion Chief Nick Schuler said.

Cal Fire officials and U.S. Border Patrol agents searched but were unable to find the two people, who may have made it safely out of the area, Schuler said, adding that no human remains were found. 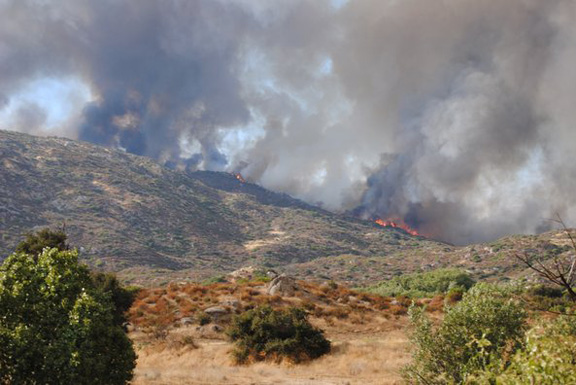