When I go to the fair, I want to see the piggies and cows and the trotting horse races. I sure don’t want some hostile Islamics hawking their violent, misogynous religion — which doesn’t even permit music, for pete’s sake.

Anyway, Muslims apparently have noticed that Americans don’t like them very much. The Muslim response in this instance is to embody the idea that not every son/daughter of Allah kills infidels every day. They intend to accomplish this goal by shoving an informational card about Islam into the hands of people attending a non-religious event.

Despite the smells of fried dough and roasted meat wafting from the Minnesota State Fair, Salim and Zuleyha Ozonder were focused on the people who were leaving, not the food or festivities beckoning from across the street.

Each time a new wave of people exited, the young Minneapolis residents — who hadn’t eaten all day — tried to press into their hands a small, glossy card that read “Islam Explained” on one side. On the other, it had about 180 words of background on a religion whose adherents fear is being misunderstood by too many Americans as violent and depraved.

“You just want people to take the card, spend a minute reading it and say, ‘Oh. They’re not terrorists,’” said 27-year-old Zuleyha. She and her husband, like other Muslims, were fasting during daylight hours for the Islamic holy month of Ramadan.

For most fairgoers, the last thing on their mind is religion — particularly the renewed controversy over Islam in America amid tension over plans for an Islamic center and mosque a few blocks from New York City’s ground zero. But volunteers with the Minnesota chapter of Islamic Circle of North America saw the mostly white, Christian fair crowd as just the type of audience that might benefit from greater understanding.

Perhaps Americans believe that already know as much about the Religion of Peace as they care to, and would prefer that traditional events be Islam-free. Just a thought.

“Look, I’m not beheading you. You want a free Koran? Allah Ackbar!” * 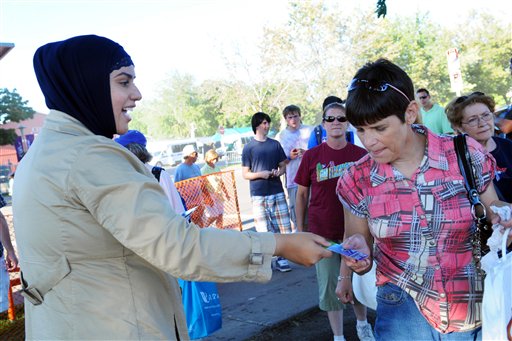 * Not a real caption.