Thursday’s LA Times had a front-page pair of stories about the two Republican candidates for Governor. The primary is June 3, and the state’s southern voice may have thought it should pretend an interest in non-Democrats. 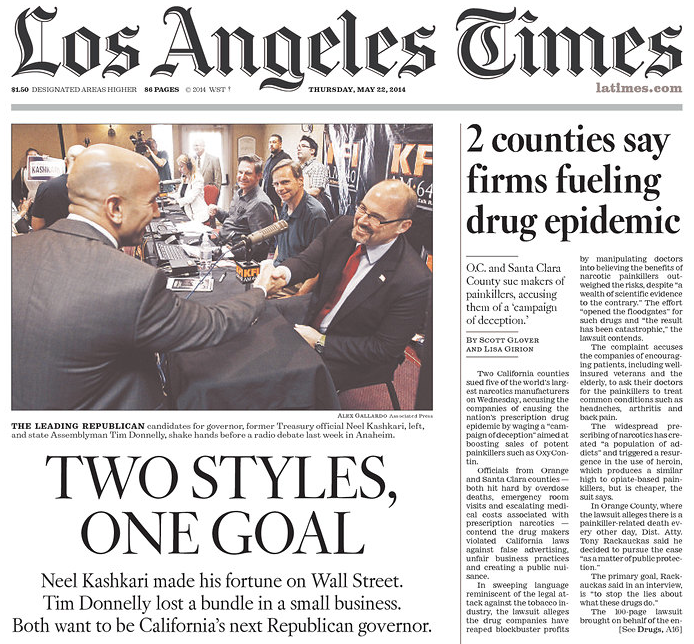 The story about Tim Donnelly (see my recent report) was mostly fair, but it couldn’t resist a mini-smear by quoting the SPLC’s sour leftwing gripe against his support for American sovereignty and immigration enforcement.

The Times must figure it can afford to be generous with Gov Jerry Brown polling at 57 percent, even though that number seems unenthusiastic in the blue blue state.

Maybe the crappy economy leaves the voters unimpressed with the choices. Except for the booming tech sector in the San Francisco Bay Area, the job growth is tepid at best, with unemployment dropping below 8 percent for the first time in six years in April. Businesses continue to relocate to friendlier states that aren’t as burdened by regulation and a glut of government handouts for Democrat cronies.

You can also read the companion piece about Donnelly’s opponent: Neel Kashkari says his diverse skills prepare him to serve as governor.

State Assemblyman Tim Donnelly was showing off his home, an unpretentious four-bedroom high in the mountains near Lake Arrowhead that, given his low-budget run for governor, doubles as a campaign office.

He hurried past his son blasting away at animated enemies on the TV screen, past the three campaign staffers hunched over computers in the dining room and the Yorkiepoo terrier Rusty, begging to be played with in the kitchen.

But when the Republican candidate arrived at a little office at the back of the garage, he paused. Pointing to a desk laced with cobwebs, he said this musty, abandoned room was central to who he is and why he is running for governor.

This, he said, is where he ran his plastic-parts business, until that business collapsed, bringing his family to the brink of financial ruin.

Many politicians might take pains to whitewash such a failure. Donnelly, who captured his Assembly seat in an upset in 2010, just before dissolving his business, wears the defeat like a badge, touting it on the campaign trail as a reason voters should elect him.

The approach plays to his conservative tea party supporters and fits right in with an old strain in American politics — an outsider stressing that status, the better to run against the establishment.

His affable yet unapologetically confrontational style is also that of a man who, long before he entered politics, lived a life full of radical gestures, sudden, idiosyncratic changes in direction and a pronounced contrarian strain.

The churchgoing lawmaker operates with the conviction that whatever he is doing is part of a larger plan — something he said was clear from the moment of his birth, when he underwent three blood transfusions to survive.

“I knew early on my life had a purpose,” he said, adding that his gubernatorial bid feels preordained. “There’s something in the air right now that’s conducive to someone who breaks all conventions … and is willing to take a stand for the people.”

As he barnstorms across California in a custom RV bearing the slogan “Patriot not Politician,” Donnelly, 48, highlights aspects of his biography that many politicians might shy from.

He talks proudly of a legislative record that, even by his own account, has left him mostly stymied and isolated in the Assembly.

He has repeatedly staged events at gun ranges, shooting firearms in the presence of reporters, leading to inevitable references to a 2012 episode in which he was arrested with an unregistered handgun in his briefcase while going through security at Ontario airport — an incident for which he remains on probation.

And when a recording surfaced this spring in which Donnelly — who founded a chapter of the Minutemen volunteer border-patrol group — could be heard comparing the immigrant rights movement to an “insurgency” in major cities that needed to be rooted out “just as we are doing in Baghdad,” he owned the remarks.

“Heck, I made the speech. Yeah. Absolutely,” he said, explaining that he wasn’t trying to incite violence in the 2006 address, but simply to recruit people to take a stand against illegal immigration.

In recent weeks, he has taken heat even from fellow Republicans for saying his main rival in the June 3 primary, GOP neophyte Neel Kashkari — a Hindu of Indian descent — adheres to harsh Islamic laws.

The third of 14 children, Donnelly grew up in suburban Detroit in a close-knit family where, he said, rules were strict, consequences were unyielding and children learned early to take responsibility for themselves.

He paid his own way through a private Christian high school, won admission to the University of Michigan and left after his freshman year — long after an arrest for stealing a stereo during what he described as a drunken escapade.

At 19, with the sort of leap into the unknown that has characterized many of his biggest choices, Donnelly packed up a VW bug and headed to California.

He moved onto a boat in San Pedro’s harbor and transferred to UC Irvine, where he studied English. Shortly before graduation, he fell in love with a young widow, Rowena, who had two small sons. She told him in no uncertain terms that she would not live on a boat.

He was just 26, but he said he knew he had to step up and make a family home for the two boys. He bought the mountain house in the hamlet of Twin Peaks. Along with Compton, it was one of the few places with homes in his price range, given his modest income from a nascent business.

He liked the area’s isolated beauty and, he said, the fact that what most of his neighbors wanted from government “was to be left alone.”

He and Rowena, whose family is from the Philippines, had three more boys as they worked to build the plastics business, which supplied machine parts to companies that made molded products. Eventually, the money was good.

Then, as Donnelly tells it, “along came the government,” with burdensome environmental and business regulations that drove his customers out of business or out of state. As his business began to falter, Donnelly became increasingly focused on illegal immigration.

He heard about the budding Minutemen movement on the radio and, in another swift decision, drove to Arizona for the first big gathering in the spring of 2005. Donnelly says he has no animus toward immigrants generally, but illegal immigration concerned him so much that by the fall he had decided to create his own chapter.

He attracted hundreds of people to an isolated camp near the town of Boulevard, on California’s border with Mexico, also drawing international media attention. There, Donnelly, who says he is so shy he sometimes dreads everyday social interactions, discovered a talent for talking to the press.

“I called my wife and said, ‘I don’t know how you do this, but I want to talk for a living,’ ” he recalled.

He began hosting camera crews from around the globe, delivering inciting lines with a pleasant smile, a tactic he uses on the campaign trail.

“It’s a great day to be a vigilante,” he told late-night comedian Stephen Colbert’s producers in 2006.

Immigrant-rights groups also saw Donnelly’s talents for attracting the media — but not as a good thing.

Heidi Beirich, director of the Southern Poverty Law Center’s intelligence project, said her group is particularly alarmed by some of Donnelly’s statements about illegal immigrants that she views as “hate speech.”

By 2006, with his business in grave trouble, Donnelly stepped away from the border and returned home to try to save the enterprise. It proved impossible.

In 2010, with his savings almost exhausted, he launched a long-shot campaign for Assembly, knocking on doors across his district to introduce himself.

“It was either win the election or go homeless,” said his wife.

He won the primary, besting a fellow Republican by fewer than 700 votes, then coasted to victory in the general election in his solidly GOP district. He was reelected in 2012.

Late last year, he announced he was running for governor, declaring at a Baldwin Park furniture factory that Democratic Gov. Jerry Brown’s “epic experiment in socialism” was “an epic fail” and promising to “unleash California’s prosperity by getting government out of the way.”

Donnelly burst out laughing when asked about the conventional wisdom that he can’t possibly win the governorship.

“That’s a good one,” he said, drawing a parallel with the Founding Fathers. “Can you imagine what the historians of today would say to a group of people who would say they are going to take on the most powerful military in the world and beat them, and start their own country?”

He added: “When someone says you can’t do something, you make that your to-do list.”