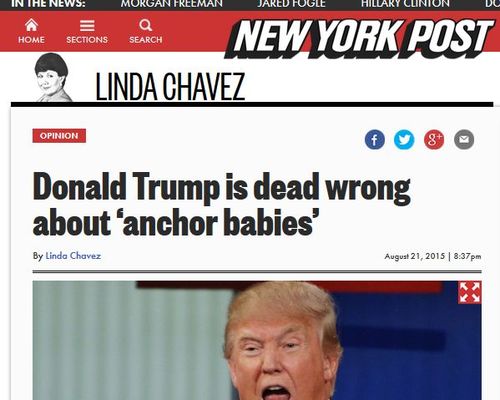 Open-borders enthusiast and syndicated columnist (and board member of janitorial-services megafirm ABM) Linda Chavez has been reading Donald Trump’s position paper on immigration.

Naturally she has things to say about it: so many things, she promises future columns dealing with Trump’s proposals.

In her current column she tackles Trump’s call for an end to birthright citizenship.

“Un-American” is technically correct:  most nations in the Western hemisphere offer birthright citizenship.  Only the Bahamas, Chile, Colombia, Haiti, and Suriname do not, according to the list at NumbersUSA (unless I missed one).

This is a pie that can be cut several ways, though.  Whether or not Trump’s proposals are un-American, birthright citizenship itself is un-Developed.  Among developed nations, on the IMF definition of “developed,” only the U.S.A. and Canada have birthright citizenship.  That’s worldwide, not just in the Americas.

By the same token, birthright citizenship is un-Anglo-Celtic by a margin of two to four:  The U.S.A. and Canada have it, but Australia, Ireland, New Zealand, and the U.K. don’t.

You might argue that enthusiasm for birthright citizenship is an index of how much you’d like the U.S.A. to resemble Latin America versus how much you’d like us to retain our Anglo-Celtic exceptionalism.  That’s somewhat of a stretch, I’ll agree, but it does take some of the shine off Ms Chavez’s use of “un-American.”

Trump says birthright citizenship “remains the biggest magnet for illegal immigration,” without adding any evidence to support it.

There’s a reason Trump offers no evidence: because it contradicts his claim.

The hysteria and misinformation prevalent on the right imagine hordes of pregnant Mexican women camped out on the border just waiting to cross and give birth to newly minted American citizens at US taxpayer expense. But the facts show otherwise.

An analysis of census data reveals that among births to illegal immigrant mothers in 2009-2010, 91 percent had been in the country for at least two years, and two-thirds had arrived at least five years before giving birth.

I think we have to give Ms Chavez a point there.  Trump was speaking hyperbolically.

Illegal immigrants are here illegally.  They have no right to “come here to work,” and they are breaking our laws by doing so.  As Trump says, the people’s executive should enforce the people’s laws.

And whatever they originally come here for, they soon become massive users of public welfare services.

… not to “drop anchor babies,” an ugly term used to refer to innocent children.

Ugliness, like beauty, is in the eye of the beholder.  I can’t see anything wrong with “anchor babies.”  It undoubtedly expresses vividly the way many, perhaps most, birthright-citizenship parents regard their offspring.

The question of whether these children are citizens by birth is a settled matter of law.

Here we get into the legal and constitutional weeds on the Fourteenth Amendment, Wong Kim Ark, and the rest.  See pages 35-40 of Ann Coulter’s book, or the fine long article by Nathaniel Parker published here on VDARE.com fourteen years ago.

It seems to me that lengthy argumentation about the jurisprudence on birthright citizenship, while no doubt interesting in its own way, is missing an important point.

Important point.  Is birthright citizenship the right policy for the U.S.A. today?  We have changed our collective mind about all sorts of things that our Constitution and laws once allowed—most notably slavery, of course.  Perhaps we should change our minds about this.  Is birthright citizenship a good thing for us today, or not?  What are the arguments for it, as benefiting the U.S.A. and U.S. citizens?  May we hear them, please?

Let’s hope we don’t need a Civil War to sort this one out.

At the time the 14th Amendment passed, there was considerable debate regarding groups that would be equivalent to today’s illegal immigrants, though the distinction between “legal” and “illegal” immigrants did not apply because no laws restricted immigration then.

Sen. Edgar Cowan, D-Pa., railed against those whose citizenship might be affirmed under the new amendment, calling for “expelling a certain number of people who invade her borders; who owe to her no allegiance; .?.??. who pay no taxes; who never perform military service; who do nothing, in fact, which becomes the citizen, and perform none of the duties which devolve upon him.”

Sound familiar? But he wasn’t talking about Mexicans. “I mean the Gypsies,” he said.

If that’s what he meant, I must say, Sen. Cowan was talking good sense.

Another Cowan diatribe sounds eerily prescient of Trump’s warnings: “There is a race in contact with this country which, in all characteristics except that of simply making fierce war, is not only our equal, but perhaps our superior.”

This will be baffling to readers unfamiliar with 19th-century American anxieties. Why doesn’t she tell us which race Sen. Cowan meant?  Is it over-suspicious of me to think that perhaps she left the race unidentified so that some subset of her readers would take the Senator’s remarks to have been anti-Semitic?

In fact Sen. Cowan clarified his meaning in his next sentence: “I mean the yellow race; the Mongol race.”  He was expressing the common and perfectly reasonable fear that our Pacific coast, under-populated and remote from the centers of American civilization, would succumb to a mass influx from China, then populous at the Malthusian limit and in the throes of late-dynastic turmoil.

(Note that Sen. Cowan’s fears were founded in part on the belief that East Asians were “perhaps our superior.”  A little later he says: “Of their industry, their skill, and their pertinacity in all worldly affairs, nobody can doubt.”  The same fear of admitting great numbers of a superior race shows up in the congressional debates on Japanese exclusion in the 1920s.  Racist?  I guess so; but surely not "supremacist.")

… Trump is dead wrong on birthright citizenship, and Republicans shouldn’t follow him down the rabbit hole.

Once again:  If birthright citizenship is a good thing for our nation today, let’s hear the arguments.