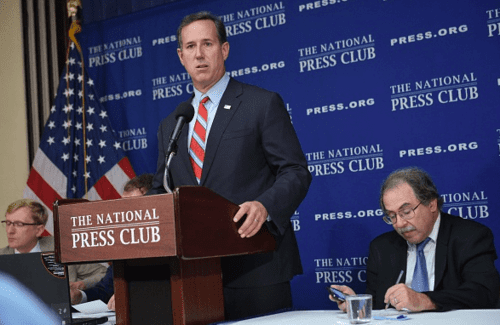 Notwithstanding all the publicity focusing on Donald Trump, which has been great getting immigration issues on the front burner, it still behooves us to pay attention to what other candidates say on immigration and related issues.

On the Republican side, that's hard because there are 17 candidates. It's a full-time job just to keep up with them.

Santorum was the runner-up candidate in 2012, but is now stuck in the lower tier of GOP candidates, polling at around 1-2%. Nevertheless, Santorum is still a candidate in a crowded field and a lot could still happen.

On August 20th, Rick Santorum spoke to the National Press Club on the topic of immigration. The speech was followed by a question and answer session on immigration and other topics.

When you boil it all down the Santorum Proposals aren't really different From the Trump Proposals, except that Santorum says he wouldn't force Mexico to pay for a border wall.

Both want to put fencing on the border, end catch-and-release, institute e-verify. Both realize that the Mexican government is facilitating illegal immigration to the U.S.

In his Press Club speech, Santorum makes a lot of good points about the economic impact of immigration. Rick is making a pitch for the blue collar vote, which is good. But it loooks like Trump now stands likely to get that demographic.

At the National Press Club, Santorum spoke about birthright citizenship. The candidate favors elimination of the anchor baby loophole, but was a little lackadaisical on the topic.

At one point Santorum said birthright citizenship wouldn't be a high priority for his administration. What? Why would you ever say right out that one of your proposals wouldn't be a priority? Furthermore, during the question and answer session, he also said there there are good arguments on both side of the debate. How about just making a forthright defense of changing current policy?

In his discussion of same-sex marriage, Santorum discussed the out-of-control Supreme Court, but never mentioned two solutions: (1) impeachment, and (2) the removal of a law from the appellate jurisdiction of the Supreme Court by Congress as per Article III, Section 2 of the Constitution?

If you would like to see the Santorum Press Club speech, watch it here:

In closing, just imagine what it would be like if all the candidates were on agreement on immigration, if they were all solid on border control and the National Question. A dream, I know, but wouldn't it be great?