The President visited Yosemite this weekend, so the public’s attention is focused on parks. Naturally, the discussion includes liberal worries that the parks are not diverse enough, and that topic was a front-pager for the San Francisco Chronicle on Sunday. 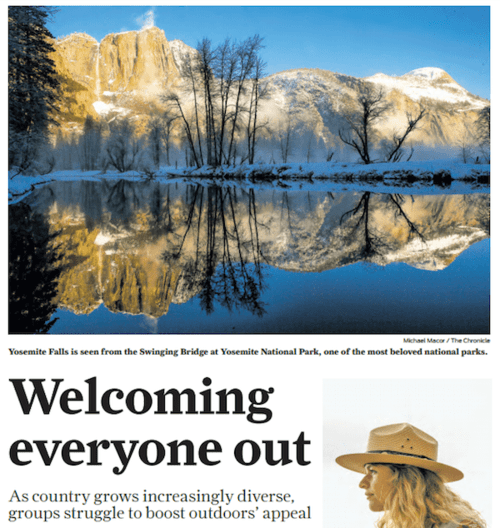 Liberal outdoorsy types, like Sierra Clubbers, worry that colorful people don’t care about wild places, and when America becomes even more diverse (as libs have engineered through immigration), then wilderness preservation will end and pavement will prevail. In the post-American United States, Yosemite Valley might be rejiggered to include luxury condos or Yellowstone could get a roller coaster to amuse the kiddies — who would be left to complain? The Mexicans won’t care.

So liberal environmentalists don’t mind assimilating non-whites to the American value of conservation. The Sierra Club has complained at length about having too many white members, but they are the stalwarts who made wilderness preservation happen.

In liberal Minneapolis, the metro council is calling for “racially equitable use of parks” — whatever that is. Do they want race quotas for use? It’s unclear.

However, there are downsides to promoting diversity in wild places. The newbie visitors bring their own cultures and values to the experience. One expression is tagging, and so-called “street artists” see nature as a swell canvas where they can squirt out their imagined creativity. 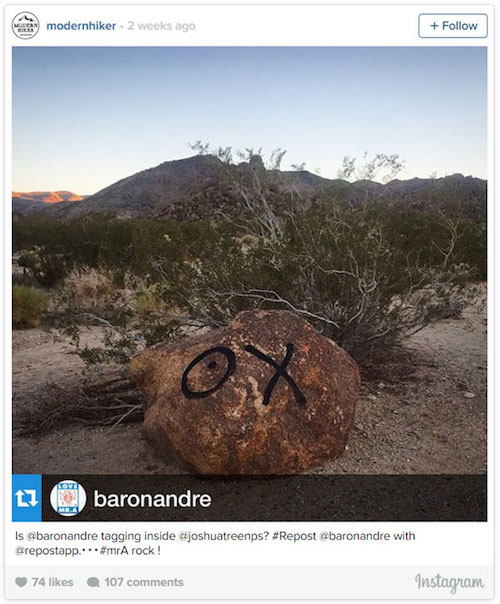 ”Mr. Andre” put his mark on Joshua Tree National Park, an act which he admitted and characterized as a “performance.”

In Joshua Tree alone, graffiti artists vandalized the popular Rattlesnake Canyon in 2013, requiring an extensive cleanup; workers just finished removing etchings from the face of Barker Dam, and in February, someone painted a large, bright blue giraffe on a boulder in 49 Palms Oasis.

About the same time, someone painted a menacing 8-foot-by-12-foot image of a skull on the wall of a historical structure in a nearby area known as the Wonderland of Rocks.

Nevertheless, the diversification of parks moves full steam ahead, as explained respectfully in the Chronicle — a project which was not appreciated by Ajit in the comments section: “I am Asian and I don’t give a rat’s a&s whether any other Asian visits any National Park. In fact, I’d rather have fewer visitors of all colors, races, and all ethnicity. Stop wasting the already meager resources of the Park system on politically-correct nonsense. Use the money to perform much-needed and postponed repairs and upkeep of these precious jewels.”

Growing up in North Hollywood, Jessica Rivas never gave much thought to the glacier-carved monolith that is Half Dome, rustic cabins along the Merced River or uniformed park rangers in flat brim hats.

These days she often can be found walking near the river, in the shadow of the granite peak.

As a wilderness ranger working in Yosemite National Park, Rivas represents the park and the National Park Service and, she says, the nature that can be “life-changing.” As a 22-year-old woman of Mexican and Lebanese descent, however, she is far from representative of most visitors and workers in a park system that belongs to an increasingly diverse U.S. population.

Just 22 percent of park-goers are ethnic minorities, according to a 2011 study that also points out that percentage had not changed noticeably since the previous survey in 2000.

The lack of diversity is even more dramatic in light of predictions that by 2020 half of all youths in America will be of color, and by 2043, whites will no longer be a majority of the U.S. population.

It’s been a dilemma for all of the National Park Service’s 100 years: The legacy left for all Americans — and paid for with everyone’s taxes — should be easily available and welcoming to the entire population.

But as the Park Service celebrates its centennial this summer, officials and experts are concerned that if they can’t broaden the base of visitors and others who support the parks, looking forward to another 100 years might be wishful thinking.

“If we’re not relevant, who’s going to care if we stay?”

Part of the solution might be, quite literally, a walk in the park.

Outdoor Afro field trip At a break in the trees on the northwest side of Angel Island, a cluster of African American men and women stop to capture the view of Marin and Mount Tamalpais from a new angle. A few take selfies with a nature-filled backdrop. The field trip was organized by Outdoor Afro, one of the variety of organizations and programs working to increasing the diversity, both in ethnicity and age.

“So much of how I became who I am is because of nature. There are lessons that nature taught me that I wouldn’t have learned anywhere else,” said Rue Mapp, founder of Oakland’s Outdoor Afro, a nonprofit network focused on reconnecting African Americans with the outdoors. “We have a chance to use nature as the ultimate open-source platform,” Mapp said. “Nature doesn’t see race. When I go out, the trees don’t know that I’m black.”

Mapp fell in love with the outdoors as a child exploring the Oakland hills and with wilderness while on a trip to Sequoia National Park when she was 20. The goal of the trips she organizes now is to get outside, as a community, for experiences that further appreciation for nature and well-being.

Robbin Summerall, with her daughters, Milan, 11, and Tahlia, 10, said that the Angel Island trip is the kind of opportunity for her family that she didn’t have.

“We just didn’t do it. It didn’t even come into our psyche to go hiking or do” the parks, said Summerall of Suisun City. “And economically, we couldn’t afford it either.”

“We had one neighbor, they were Caucasian, and they would go to Yosemite and stuff,” said Summerall, who grew up in Vallejo. “We would just be like, ‘OK, Yosemite. And? What, is Yogi Bear there?’” she said, referring to the cartoon character from fictional Jellystone Park. “That’s about the only exposure I had was cartoons. Yogi Bear.”

Outdoor Afro’s primary demographic is African American, although anyone can sign up and attend. Similarly, San Francisco’s Latino Outdoors organizes outings and events geared toward a Latino population that emphasize leadership and culture.

The short day hikes often are a gateway to longer trips and bigger parks, said Mapp. “Our priorities include our national parks, but all public lands whenever possible. Not everybody is going to go to Yosemite or Yellowstone.”

Presidential visit President Obama and his family, who have visited national parks including Yellowstone, Grand Canyon, the Blue Ridge Parkway and Acadia during his presidency, visited Yosemite this weekend in part to draw attention to the importance of public lands. The visit certainly doesn’t hurt the cause of the Next 100 Coalition, a group of organizations (including Latino Outdoors and Outdoor Afro) asking Obama for a presidential memorandum aimed at “increasing inclusion and representation of America’s communities of color in our national parks and other public lands.”

Among supporters for coalition efforts is Carolyn Finney, author of “Black Faces, White Spaces: Reimagining the Relationship of African Americans to the Great Outdoors,” who is on the National Park Service advisory board looking at issues of diversity.

According to Finney, the lack of diversity in the great outdoors — and its causes — isn’t really separate from many other elements of American life. Most of what’s behind it can be divided between the assumptions that society makes about ethnic minorities as it relates to the environment and representation, from the faces on park brochures to the stories that are told in the park, to who makes the decisions. Historically, the “who” has overwhelmingly been white. “Environmental organizations in general are really poor in terms of diversity in their leadership,” she said.

“It’s not simply about visitors. It’s about a broader understanding of who are the parks for, who participates in deciding how the parks are represented and understood,” Finney said. “Visitors are just one piece of a larger issue.”

City girl to park ranger Among those trying to change assumptions is Yosemite ranger Rivas, who in 2011 as a UC Merced freshman took a left turn at a flyer for the Yosemite Leadership Program and soon went from city girl to park ranger. The two-year program takes 25 students per year and, along with summer internships, prepares students to enter the National Park Service following graduation.

Rivas, who now works at the wilderness centers at Yosemite and at UC Merced, leads ranger-guided tours, and helps bring fourth-grade classrooms from rural communities into the park as part of the White House’s Every Kid in a Park initiative, said that her stint in the leadership program left her “addicted.”

“As we become more technological, we become more removed, and I think that these places offer a sense of overall care for things that are beyond us and bigger than us,” she said. “These places exist for a reason, and it can change your life.”

Yosemite Leadership Program is part of a drive at UC Merced, a school in which 68 percent of the students are first-generation Latino or Asian, to guide a young, diverse body of students into the workforce that protects and represents public lands. It’s tied to other programs that focus on high school students, including Wild Link, NatureBridge and Adventure Risk Challenge. The Park Service also connected with the Student Conservation Association, which places youth volunteers in work projects and internships.

The Yosemite program and others are valuable, Rivas said, if only because minority visitors will begin to see more of the park’s workforce, including rangers, who look more like them. “The more people see themselves, the more connected they feel to these places,” she said. “It makes people care about these places because it shows that they belong. It shows they’re welcome.”

Steve Shackelton, a former chief ranger for both Yosemite and the National Park System who works with UC Merced now, says the university’s programs are part of the strategy to solve both of the major issues that stem from the lack of diversity: fairness and relevance.

“We need to do it because we want there to be a park system going forward,” he said, “but also because it’s the right thing to do.”

Progress in diversity The Park Service’s Olson said there has been progress in terms of cultural diversity of the parks themselves — most of the parks opened in the past decade have been cultural and historical in nature, including the Charles Young Buffalo Soldiers, Harriet Tubman Underground Railroad, Cesar Chavez, Belmont-Paul Women’s Equality and Pullman national monuments.

And if the parks fail to be relevant with an increasingly diverse population? According to Olson, the unthinkable becomes possible. “If we expect to be here and do what we do, then Congress needs to know that it’s important to the people who send them to Congress.”

“It’s important across a wide spectrum. It’s very American, part of our heritage, and we need to pass that along to new Americans,” Olson said. “And it’s a real, cold dollars-and-cents issue on the other end of the spectrum.”