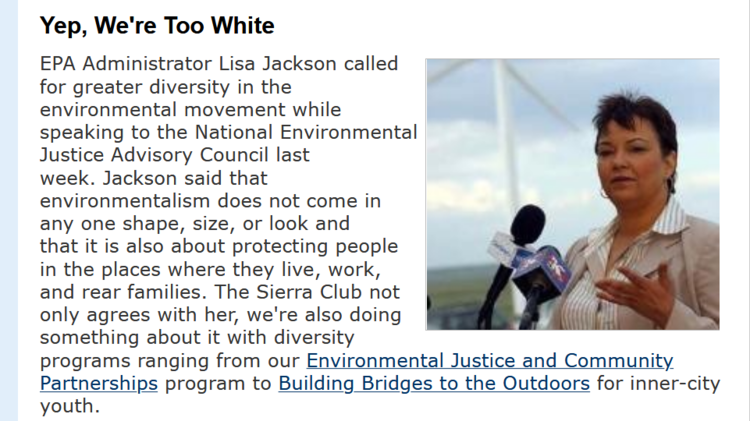 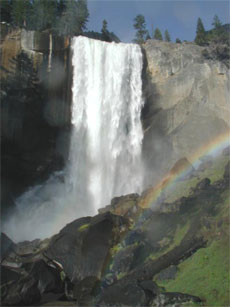 The Sierra Club posted a silly blog item recently which shows how the organization continues to immerse itself in PC: "Yep, We're Too White".

EPA Administrator Lisa Jackson called for greater diversity in the environmental movement while speaking to the National Environmental Justice Advisory Council last week.Jackson said that environmentalism does not come in any one shape, size, or look and that it is also about protecting people in the places where they live, work, and rear families. The Sierra Club not only agrees with her, were also doing something about it with diversity programs ranging from our Environmental Justice and Community Partnerships program to Building Bridges to the Outdoors for inner-city youth.

"We are proud that Sierra Club has successful diversity programs already established," said the Sierra Club President Allison Chin. "Now, with the leadership of a diversity council and my election as our first Asian-American president, the Sierra Club is committed to becoming an even more welcoming and inclusive organization."

I like the suggestion of poster Dana Garcia about a strategy to increase diversity in the Sierra Club:

I agree. [Executive Director] Carl Pope and white staffers making over $100K should resign to open those positions for persons of color. It would be a fine way to lead by example — far better than meaningless programs to increase diversity that actually do little to advance real change.

The Sierra Club not only disrespected its loyal membership, but also disregarded its long history as a hiking group. Tromping through forests and mountains for the fun of it is more of a white thing, just as ikebana activities attract Asians. Hiking is not a particularly diverse pursuit.

But the Sierra Club now extends into liberal politics, which means it must be diverse, and there have been problems arriving at an acceptable palette of colors: In Environmental Push, Looking to Add Diversity [New York Times, March 9, 2009]

Even organizations like the Sierra Club, which has incorporated social justice work since the 1990s, concede that their diversity efforts have failed to gain traction. The organization's executive director, Carl Pope, points at "cultural barriers" that in effect shut the door to nonwhites regardless of good intentions.

"If you go to a Sierra Club meeting, the people are mostly white, largely over 40, almost all college-educated, whose style is to argue with each other," Mr. Pope said. "That may not be a welcoming environment."

Sadly, the Sierra Club has shelved its mission of being a non-partisan protector of the earth to become a left-wing diversity organization with hiking boots. It has corrupted itself with both money (the Gelbaum bribe of $100M to not mention immigration) and socialist ideology, including support for massive immigration.

One controversy over money has been the selling of the Sierra Club name to Clorox as a green product endorsement. In the resulting furor, Club management decapitated the Florida group for objecting to the deal: Sierra Club removes leadership of its Florida chapter.

Two decades ago, the Club spoke responsibly about immigration and promoted "population stabilization in the U.S." But that integrity is long gone.